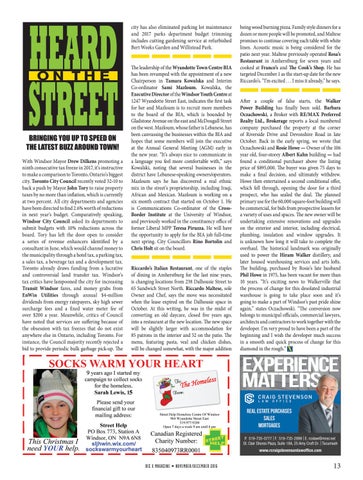 BRINGING YOU UP TO SPEED ON THE LATEST BUZZ AROUND TOWN! With Windsor Mayor Drew Dilkens promoting a ninth consecutive tax freeze in 2017, it’s instructive to make a comparison to Toronto, Ontario’s biggest city. Toronto City Council recently voted 32-10 to back a push by Mayor John Tory to raise property taxes by no more than inflation, which is currently at two percent. All city departments and agencies have been directed to find 2.6% worth of reductions in next year’s budget. Comparatively speaking, Windsor City Council asked its departments to submit budgets with 10% reductions across the board. Tory has left the door open to consider a series of revenue enhancers identified by a consultant in June, which would channel money to the municipality through a hotel tax, a parking tax, a sales tax, a beverage tax and a development tax. Toronto already draws funding from a lucrative and controversial land transfer tax. Windsor’s tax critics have lampooned the city for increasing Transit Windsor fares, and money grabs from EnWin Utilities through annual $4-million dividends from energy ratepayers, sky high sewer surcharge fees and a fixed water meter fee of over $200 a year. Meanwhile, critics of Council have noted that services are suffering because of the obsession with tax freezes that do not exist anywhere else in Ontario, including Toronto. For instance, the Council majority recently rejected a bid to provide periodic bulk garbage pick-up. The

The leadership of the Wyandotte Town Centre BIA has been revamped with the appointment of a new Chairperson in Tamara Kowalska and Interim Co-ordinator Sami Mazloum. Kowalska, the Executive Director of the Windsor Youth Centre at 1247 Wyandotte Street East, indicates the first task for her and Mazloum is to recruit more members to the board of the BIA, which is bounded by Gladstone Avenue on the east and McDougall Street on the west. Mazloum, whose father is Lebanese, has been canvassing the businesses within the BIA and hopes that some members will join the executive at the Annual General Meeting (AGM) early in the new year. “It’s always nice to communicate in a language you feel more comfortable with,” says Kowalski, noting that several businesses in the district have Lebanese-speaking owners/operators. Mazloum says he has discovered a real ethnic mix in the street’s proprietorship, including Iraqi, African and Mexican. Mazloum is working on a six month contract that started on October 1. He is Communications Co-ordinator of the CrossBorder Institute at the University of Windsor, and previously worked in the constituency office of former Liberal MPP Teresa Piruzza. He will have the opportunity to apply for the BIA job full-time next spring. City Councillors Rino Bortolin and Chris Holt sit on the board. Riccardo’s Italian Restaurant, one of the staples of dining in Amherstburg for the last nine years, is changing locations from 238 Dalhousie Street to 65 Sandwich Street North. Riccardo Maltese, sole Owner and Chef, says the move was necessitated when the lease expired on the Dalhousie space in October. At this writing, he was in the midst of converting an old daycare, closed five years ago, into a restaurant at the new location. The new space will be slightly larger with accommodation for 85 patrons in the interior and 52 on the patio. The menu, featuring pasta, veal and chicken dishes, will be changed somewhat, with the major addition

being wood burning pizza. Family style dinners for a dozen or more people will be promoted, and Maltese promises to continue covering each table with white linen. Acoustic music is being considered for the patio next year. Maltese previously operated Rosa’s Restaurant in Amherstburg for seven years and cooked at Franco’s and The Cook’s Shop. He has targeted December 1 as the start-up date for the new Riccardo’s. “I’m excited . . . I miss it already,” he says. After a couple of false starts, the Walker Power Building has finally been sold. Barbara Oczachowski, a Broker with RE/MAX Preferred Realty Ltd., Brokerage reports a local numbered company purchased the property at the corner of Riverside Drive and Devonshire Road in late October. Back in the early spring, we wrote that Oczachowski and Rosie Howe — Owner of the 106 year old, four-storey Albert Kahn building — had found a conditional purchaser above the listing price of $895,000. The buyer was given 75 days to make a final decision, and ultimately withdrew. Howe then entertained a second conditional offer, which fell through, opening the door for a third prospect, who has sealed the deal. The planned primary use for the 60,000 square-foot building will be commercial, for bids from prospective leasers for a variety of uses and spaces. The new owner will be undertaking extensive renovations and upgrades on the exterior and interior, including electrical, plumbing, insulation and window upgrades. It is unknown how long it will take to complete the overhaul. The historical landmark was originally used to power the Hiram Walker distillery, and later housed warehousing services and arts lofts. The building, purchased by Rosie’s late husband Phil Howe in 1975, has been vacant for more than 10 years. “It’s exciting news to Walkerville that the process of change for this desolated industrial warehouse is going to take place soon and it’s going to make a part of Windsor’s past pride shine again,” states Oczachowski. “The conversion now belongs to municipal officials, commercial lawyers, architects and contractors to work together with the developer. I’m very proud to have been a part of the beginning and I wish the developer much success in a smooth and quick process of change for this diamond in the rough.”

Here at the magazine, we always wrap up our last edition of the year on a high note, honouring our Biz X Award winners and nominees. From th...

Here at the magazine, we always wrap up our last edition of the year on a high note, honouring our Biz X Award winners and nominees. From th...