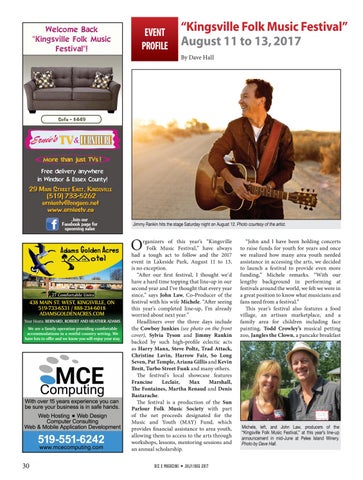 rganizers of this year’s “Kingsville Folk Music Festival,” have always had a tough act to follow and the 2017 event in Lakeside Park, August 11 to 13, is no exception. “After our first festival, I thought we’d have a hard time topping that line-up in our second year and I’ve thought that every year since,” says John Law, Co-Producer of the festival with his wife Michele. “After seeing this year’s completed line-up, I’m already worried about next year.” Headliners over the three days include the Cowboy Junkies (see photo on the front cover), Sylvia Tyson and Jimmy Rankin backed by such high-profile eclectic acts as Harry Manx, Steve Poltz, Trad Attack, Christine Lavin, Harrow Fair, So Long Seven, Pat Temple, Ariana Gillis and Kevin Breit, Turbo Street Funk and many others. The festival’s local showcase features Francine Leclair, Max Marshall, The Fontaines, Martha Renaud and Denis Bastarache. The festival is a production of the Sun Parlour Folk Music Society with part of the net proceeds designated for the Music and Youth (MAY) Fund, which provides financial assistance to area youth, allowing them to access to the arts through workshops, lessons, mentoring sessions and an annual scholarship.

“John and I have been holding concerts to raise funds for youth for years and once we realized how many area youth needed assistance in accessing the arts, we decided to launch a festival to provide even more funding,” Michele remarks. “With our lengthy background in performing at festivals around the world, we felt we were in a great position to know what musicians and fans need from a festival.” This year’s festival also features a food village, an artisan marketplace, and a family area for children including face painting, Todd Crowley’s musical petting zoo, Jangles the Clown, a pancake breakfast