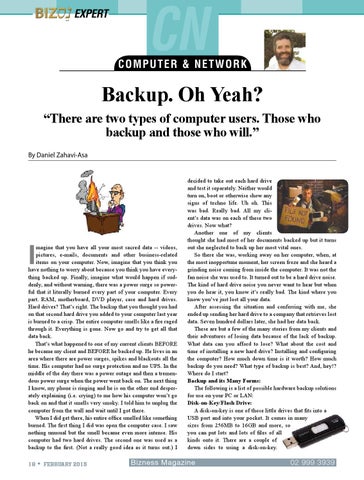 Backup. Oh Yeah? “There are two types of computer users. Those who backup and those who will.” By Daniel Zahavi-Asa

magine that you have all your most sacred data -- videos, pictures, e-mails, documents and other business-related items on your computer. Now, imagine that you think you have nothing to worry about because you think you have everything backed up. Finally, imagine what would happen if suddenly, and without warning, there was a power surge so powerful that it literally burned every part of your computer. Every part. RAM, motherboard, DVD player, case and hard drives. Hard drives? That’s right. The backup that you thought you had on that second hard drive you added to your computer last year is burned to a crisp. The entire computer smells like a fire raged through it. Everything is gone. Now go and try to get all that data back. That’s what happened to one of my current clients BEFORE he became my client and BEFORE he backed up. He lives in an area where there are power surges, spikes and blackouts all the time. His computer had no surge protection and no UPS. In the middle of the day there was a power outage and then a tremendous power surge when the power went back on. The next thing I know, my phone is ringing and he is on the other end desperately explaining (i.e. crying) to me how his computer won’t go back on and that it smells very smoky. I told him to unplug the computer from the wall and wait until I got there. When I did get there, his entire office smelled like something burned. The first thing I did was open the computer case. I saw nothing unusual but the smell became even more intense. His computer had two hard drives. The second one was used as a backup to the first. (Not a really good idea as it turns out.) I 18

decided to take out each hard drive and test it separately. Neither would turn on, boot or otherwise show any signs of techno life. Uh oh. This was bad. Really bad. All my client’s data was on each of these two drives. Now what? Another one of my clients thought she had most of her documents backed up but it turns out she neglected to back up her most vital ones. So there she was, working away on her computer, when, at the most inopportune moment, her screen froze and she heard a grinding noise coming from inside the computer. It was not the fan noise she was used to. It turned out to be a hard drive noise. The kind of hard drive noise you never want to hear but when you do hear it, you know it’s really bad. The kind where you know you’ve just lost all your data. After assessing the situation and conferring with me, she ended up sending her hard drive to a company that retrieves lost data. Seven hundred dollars later, she had her data back. These are but a few of the many stories from my clients and their adventures of losing data because of the lack of backup. What data can you afford to lose? What about the cost and time of installing a new hard drive? Installing and configuring the computer? How much down time is it worth? How much backup do you need? What type of backup is best? And, hey!? Where do I start? Backup and its Many Forms: The following is a list of possible hardware backup solutions for use on your PC or LAN: Disk-on-Key/Flash Drive: A disk-on-key is one of those little drives that fits into a USB port and into your pocket. It comes in many sizes from 256MB to 16GB and more, so you can put lots and lots of files of all kinds onto it. There are a couple of down sides to using a disk-on-key.

Possibly the most read English magazine in Israel 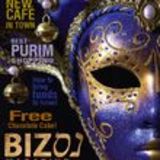