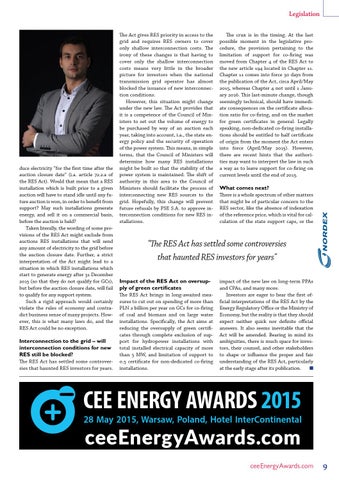 duce electricity “for the first time after the auction closure date” (i.a. article 72.2.a of the RES Act). Would that mean that a RES installation which is built prior to a given auction will have to stand idle until any future auction is won, in order to benefit from support? May such installations generate energy, and sell it on a commercial basis, before the auction is held? Taken literally, the wording of some provisions of the RES Act might exclude from auctions RES installations that will send any amount of electricity to the grid before the auction closure date. Further, a strict interpretation of the Act might lead to a situation in which RES installations which start to generate energy after 31 December 2015 (so that they do not qualify for GCs), but before the auction closure date, will fail to qualify for any support system. Such a rigid approach would certainly violate the rules of economy and contradict business sense of many projects. However, this is what many laws do, and the RES Act could be no exception. Interconnection to the grid – will interconnection conditions for new RES still be blocked? The RES Act has settled some controversies that haunted RES investors for years.

The Act gives RES priority in access to the grid and requires RES owners to cover only shallow interconnection costs. The irony of these changes is that having to cover only the shallow interconnection costs means very little in the broader picture for investors when the national transmission grid operator has almost blocked the issuance of new interconnection conditions. However, this situation might change under the new law. The Act provides that it is a competence of the Council of Ministers to set out the volume of energy to be purchased by way of an auction each year, taking into account, i.a., the state energy policy and the security of operation of the power system. This means, in simple terms, that the Council of Ministers will determine how many RES installations might be built so that the stability of the power system is maintained. The shift of authority in this area to the Council of Ministers should facilitate the process of interconnecting new RES sources to the grid. Hopefully, this change will prevent future refusals by PSE S.A. to approve interconnection conditions for new RES installations.

The crux is in the timing. At the last possible moment in the legislative procedure, the provision pertaining to the limitation of support for co-firing was moved from Chapter 4 of the RES Act to the new article 194 located in Chapter 11. Chapter 11 comes into force 30 days from the publication of the Act, circa April/May 2015, whereas Chapter 4 not until 1 January 2016. This last-minute change, though seemingly technical, should have immediate consequences on the certificate allocation ratio for co-firing, and on the market for green certificates in general. Legally speaking, non-dedicated co-firing installations should be entitled to half certificate of origin from the moment the Act enters into force (April/May 2015). However, there are recent hints that the authorities may want to interpret the law in such a way as to leave support for co-firing on current levels until the end of 2015. What comes next? There is a whole spectrum of other matters that might be of particular concern to the RES sector, like the absence of indexation of the reference price, which is vital for calculation of the state support caps, or the

“The RES Act has settled some controversies that haunted RES investors for years” Impact of the RES Act on oversupply of green certificates The RES Act brings in long-awaited measures to cut out on spending of more than PLN 2 billion per year on GCs for co-firing of coal and biomass and on large water installations. Specifically, the Act aims at reducing the oversupply of green certificates through complete exclusion of support for hydropower installations with total installed electrical capacity of more than 5 MW, and limitation of support to 0.5 certificate for non-dedicated co-firing installations.

impact of the new law on long-term PPAs and CPAs, and many more. Investors are eager to hear the first official interpretations of the RES Act by the Energy Regulatory Office or the Ministry of Economy, but the reality is that they should expect neither quick nor definite official answers. It also seems inevitable that the Act will be amended. Bearing in mind its ambiguities, there is much space for investors, their counsel, and other stakeholders to shape or influence the proper and fair understanding of the RES Act, particularly at the early stage after its publication. n

The annual Directory of all Wind farms and developers in Poland. Distribution at PSEW Wind conference and 28 May CEE Energy Awards.