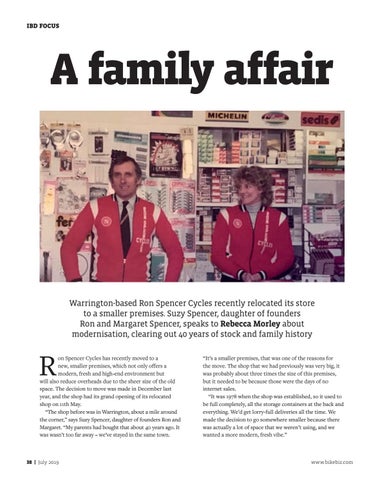 on Spencer Cycles has recently moved to a new, smaller premises, which not only offers a modern, fresh and high-end environment but will also reduce overheads due to the sheer size of the old space. The decision to move was made in December last year, and the shop had its grand opening of its relocated shop on 11th May. “The shop before was in Warrington, about a mile around the corner,” says Suzy Spencer, daughter of founders Ron and Margaret. “My parents had bought that about 40 years ago. It was wasn’t too far away – we’ve stayed in the same town.

“It’s a smaller premises, that was one of the reasons for the move. The shop that we had previously was very big, it was probably about three times the size of this premises, but it needed to be because those were the days of no internet sales. “It was 1978 when the shop was established, so it used to be full completely, all the storage containers at the back and everything. We’d get lorry-full deliveries all the time. We made the decision to go somewhere smaller because there was actually a lot of space that we weren’t using, and we wanted a more modern, fresh vibe.”