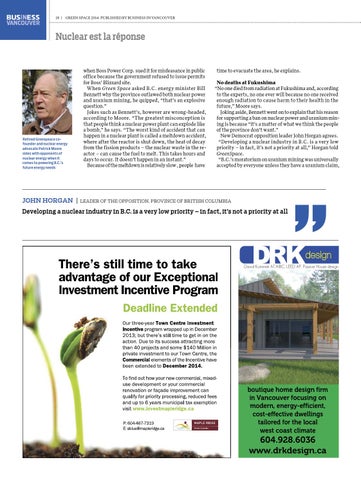 when Boss Power Corp. sued it for misfeasance in public office because the government refused to issue permits for Boss’ Blizzard site. When Green Space asked B.C. energy minister Bill Bennett why the province outlawed both nuclear power and uranium mining, he quipped, “that’s an explosive question.” Jokes such as Bennett’s, however are wrong-headed, according to Moore. “The greatest misconception is that people think a nuclear power plant can explode like a bomb,” he says. “The worst kind of accident that can happen in a nuclear plant is called a meltdown accident, where after the reactor is shut down, the heat of decay from the fission products – the nuclear waste in the reactor – can cause the fuel to melt. This takes hours and days to occur. It doesn’t happen in an instant.” Because of the meltdown is relatively slow , people have

time to evacuate the area, he explains. No deaths at Fukushima “No one died from radiation at Fukushima and, according to the experts, no one ever will because no one received enough radiation to cause harm to their health in the future,” Moore says. Joking aside, Bennett went on to explain that his reason for supporting a ban on nuclear power and uranium mining is because “it’s a matter of what we think the people of the province don’t want.” New Democrat opposition leader John Horgan agrees. “Developing a nuclear industry in B.C. is a very low priority – in fact, it’s not a priority at all,” Horgan told GreenSpace. “B.C.’s moratorium on uranium mining was universally accepted by everyone unless they have a uranium claim,

JOHN HORGAN |  LEADER OF THE OPPOSITION, PROVINCE OF BRITISH COLUMBIA Developing a nuclear industry in B.C. is a very low priority – in fact, it’s not a priority at all

Your go-to guide for everything in green business: the trends, the suppliers, the designers and corporate social responsibility.

Your go-to guide for everything in green business: the trends, the suppliers, the designers and corporate social responsibility.