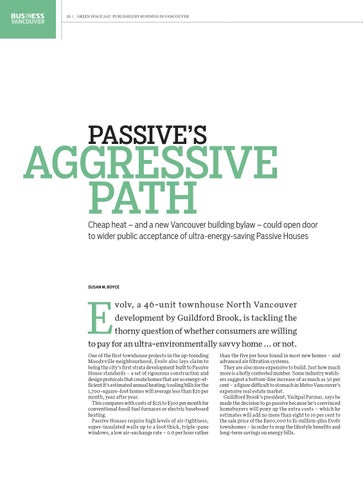 volv, a 46-unit townhouse North Vancouver development by Guildford Brook, is tackling the thorny question of whether consumers are willing to pay for an ultra-environmentally savvy home … or not.

One of the first townhouse projects in the up-trending Moodyville neighbourhood, Evolv also lays claim to being the city’s first strata development built to Passive House standards – a set of rigourous construction and design protocols that create homes that are so energy-efficient it’s estimated annual heating/cooling bills for the 1,700-square-foot homes will average less than $20 per month, year after year. This compares with costs of $125 to $300 per month for conventional fossil fuel furnaces or electric baseboard heating. Passive Houses require high levels of air-tightness, super-insulated walls up to a foot thick, triple-pane windows, a low air-exchange rate – 0.6 per hour rather

than the five per hour found in most new homes – and advanced air filtration systems. They are also more expensive to build. Just how much more is a hotly contested number. Some industry watchers suggest a bottom-line increase of as much as 30 per cent – a figure difficult to stomach in Metro Vancouver’s expensive real estate market. Guildford Brook’s president, Yashpal Parmar, says he made the decision to go passive because he’s convinced homebuyers will pony up the extra costs – which he estimates will add no more than eight to 10 per cent to the sale price of the $900,000 to $1-million-plus Evolv townhomes – in order to reap the lifestyle benefits and long-term savings on energy bills.