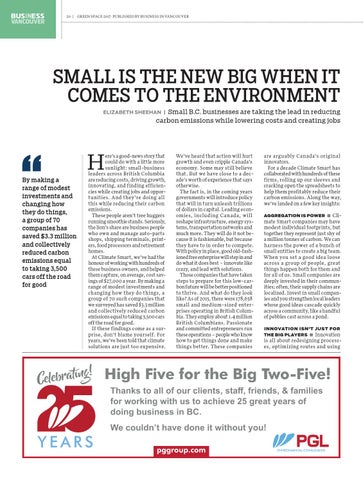 SMALL IS THE NEW BIG WHEN IT COMES TO THE ENVIRONMENT Small B.C. businesses are taking the lead in reducing carbon emissions while lowering costs and creating jobs

H By making a range of modest investments and changing how they do things, a group of 70 companies has saved $3.3 million and collectively reduced carbon emissions equal to taking 3,500 cars off the road for good

ereâ&#x20AC;&#x2122;s a good-news story that could do with a little more sunlight: small-business leaders across British Columbia are reducing costs, driving growth, innovating, and finding efficiencies while creating jobs and opportunities. A nd theyâ&#x20AC;&#x2122;re doing all this while reducing their carbon emissions. These people arenâ&#x20AC;&#x2122;t tree huggers running smoothie stands. Seriously, the lionâ&#x20AC;&#x2122;s share are business people who own and manage auto-parts shops, shipping terminals, printers, food processors and retirement homes. At Climate Smart, weâ&#x20AC;&#x2122;ve had the honour of working with hundreds of these business owners, and helped them capture, on average, cost savings of $27,000 a year. By making a range of modest investments and changing how they do things, a group of 70 such companies that we surveyed has saved $3.3 million and collectively reduced carbon emissions equal to taking 3,500 cars off the road for good. If these findings come as a surprise, donâ&#x20AC;&#x2122;t blame yourself. For years, weâ&#x20AC;&#x2122;ve been told that climate solutions are just too expensive.

Weâ&#x20AC;&#x2122;ve heard that action will hurt growth and even cripple Canadaâ&#x20AC;&#x2122;s economy. Some may still believe that. But we have close to a decadeâ&#x20AC;&#x2122;s worth of experience that says otherwise. The fact is, in the coming years governments will introduce policy that will in turn unleash trillions of dollars in capital. Leading econom ies, i nclud i ng Ca nada, w i l l reshape infrastructure, energy systems, transportation networks and much more. They will do it not because it is fashionable, but because they have to in order to compete. With policy in place, good old-fashioned free enterprise will step in and do what it does best â&#x20AC;&#x201C; innovate like crazy, and lead with solutions. Those companies that have taken steps to prepare for this low-carbon future will be better positioned to thrive. And what do they look like? As of 2015, there were 178,638 small and medium-sized enterprises operating in British Columbia. They employ about 1.4 million British Columbians. Passionate and committed entrepreneurs run these operations â&#x20AC;&#x201C; people who know how to get things done and make things better. These companies

are arguably Canadaâ&#x20AC;&#x2122;s original innovators. For a decade Climate Smart has collaborated with hundreds of these firms, rolling up our sleeves and cracking open the spreadsheets to help them profitably reduce their carbon emissions. Along the way, weâ&#x20AC;&#x2122;ve landed on a few key insights: AGGREGATION IS POWER Q Cli-

mate Smart companies may have modest individual footprints, but together they represent just shy of a million tonnes of carbon. We can harness the power of a bunch of small entities to create a big team. W hen you set a good idea loose across a group of people, great things happen both for them and for all of us. Small companies are deeply invested in their communities; often, their supply chains are localized. Invest in small companies and you strengthen local leaders whose good ideas cascade quickly across a community, like a handful of pebbles cast across a pond. INNOVATION ISNâ&#x20AC;&#x2122;T JUST FOR THE BIG PLAYERS Q Innovation

is all about redesigning processes, optimizing routes and using