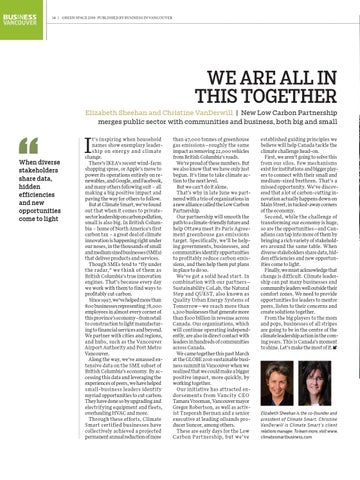 WE ARE ALL IN THIS TOGETHER Elizabeth Sheehan and Christine VanDerwill | New Low Carbon Partnership merges public sector with communities and business, both big and small

t’s inspiring when household names show exemplary leadersh ip on energ y a nd cl i mate change. There’s IKEA’s recent wind-farm shopping spree, or Apple’s move to power its operations entirely on renewables, and Google, and Facebook, and many others following suit – all making a big positive impact and paving the way for others to follow. But at Climate Smart, we’ve found out that when it comes to privatesector leadership on carbon pollution, small is also big. In British Columbia – home of North America’s first carbon tax – a great deal of climate innovation is happening right under our noses, in the thousands of small and medium sized businesses (SMEs) that deliver products and services. Though SMEs tend to “fly under the radar,” we think of them as British Columbia’s true innovation engines. That’s because every day we work with them to find ways to profitably cut carbon. Since 1997, we’ve helped more than 800 businesses representing 78,000 employees in almost every corner of this province’s economy—from retail to construction to light manufacturing to financial services and beyond. We partner with cities and regions, and hubs, such as the Vancouver Airport Authority and Port Metro Vancouver. Along the way, we’ve amassed extensive data on the SME subset of British Columbia’s economy. By accessing this data and leveraging the experiences of peers, we have helped small-business leaders identify myriad opportunities to cut carbon. They have done so by upgrading and electrifying equipment and fleets, overhauling HVAC and more. Through these efforts, Climate Smart certified businesses have collectively achieved a projected permanent annual reduction of more

than 97,000 tonnes of greenhouse gas emissions—roughly the same impact as removing 22,000 vehicles from British Columbia’s roads. We’re proud of these numbers. But we also know that we have only just begun. It’s time to take climate action to the next level. But we can’t do it alone. That’s why in late June we partnered with a trio of organizations in a new alliance called the Low Carbon Partnership. Our partnership will smooth the path to a climate-friendly future and help Ottawa meet its Paris Agreement greenhouse gas emissions target. Specifically, we’ll be helping governments, businesses, and communities identify opportunities to profitably reduce carbon emissions, and then help them put plans in place to do so. We’ve got a solid head start. In combination with our partners— Sustainability CoLab, the Natural Step and QUEST, also known as Quality Urban Energy Systems of Tomorrow—we reach more than 1,200 businesses that generate more than $100 billion in revenue across Canada. Our organizations, which will continue operating independently, are also in direct contact with leaders in hundreds of communities across Canada. We came together this past March at the GLOBE 2016 sustainable business summit in Vancouver when we realized that we could make a bigger positive impact, more quickly, by working together. Our initiative has attracted endorsements from Vancity CEO Tamara Vrooman, Vancouver mayor Gregor Robertson, as well as activist Tzeporah Berman and a senior executive at leading oilsands producer Suncor, among others. These are early days for the Low Carbon Partnership, but we’ve

established guiding principles we believe will help Canada tackle the climate challenge head-on. First, we aren’t going to solve this from our silos. Few mechanisms exist for institutions and bigger players to connect with their small and medium-sized brethren. That’s a missed opportunity. We’ve discovered that a lot of carbon-cutting innovation actually happens down on Main Street, in tucked-away corners of the economy. Second, while the challenge of transforming our economy is huge, so are the opportunities—and Canadians can tap into more of them by bringing a rich variety of stakeholders around the same table. When diverse stakeholders share data, hidden efficiencies and new opportunities come to light. Finally, we must acknowledge that change is difficult. Climate leadership can put many businesses and community leaders well outside their comfort zones. We need to provide opportunities for leaders to mentor peers, listen to their concerns and create solutions together. From the big players to the mom and pops, businesses of all stripes are going to be in the centre of the climate leadership action in the coming years. This is Canada’s moment to shine. Let’s make the most of it. É