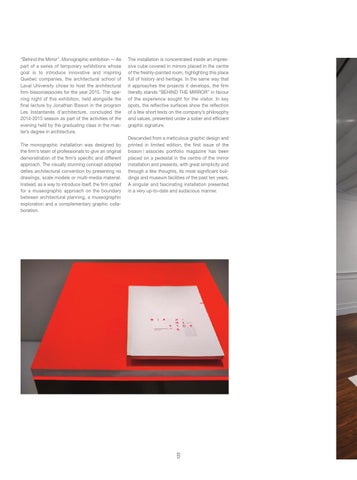 The monographic installation was designed by the firm’s team of professionals to give an original demonstration of the firm’s specific and different approach. The visually stunning concept adopted defies architectural convention by presenting no drawings, scale models or multi-media material. Instead, as a way to introduce itself, the firm opted for a museographic approach on the boundary between architectural planning, a museographic exploration and a complementary graphic collaboration.

The installation is concentrated inside an impressive cube covered in mirrors placed in the centre of the freshly-painted room, highlighting this place full of history and heritage. In the same way that it approaches the projects it develops, the firm literally stands “BEHIND THE MIRROR” in favour of the experience sought for the visitor. In key spots, the reflective surfaces show the reflection of a few short texts on the company’s philosophy and values, presented under a sober and efficient graphic signature. Descended from a meticulous graphic design and printed in limited edition, the first issue of the bisson | associés portfolio magazine has been placed on a pedestal in the centre of the mirror installation and presents, with great simplicity and through a few thoughts, its most significant buildings and museum facilities of the past ten years. A singular and fascinating installation presented in a very up-to-date and audacious manner.

“Behind the Mirror”. Monographic exhibition — As part of a series of temporary exhibitions whose goal is to introduce innovative and inspiring Quebec companies, the architectural school of Laval University chose to host the architectural firm bisson|associés for the year 2015. The opening night of this exhibition, held alongside the final lecture by Jonathan Bisson in the program Les Instantanés d’architecture, concluded the 2014-2015 season as part of the activities of the evening held by the graduating class in the master’s degree in architecture.