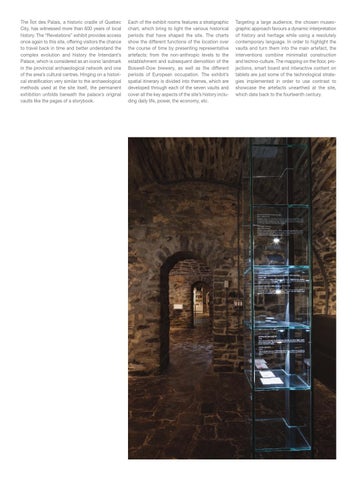 The Îlot des Palais, a historic cradle of Quebec City, has witnessed more than 600 years of local history. The “Revelations” exhibit provides access once again to this site, offering visitors the chance to travel back in time and better understand the complex evolution and history the Intendant’s Palace, which is considered as an iconic landmark in the provincial archaeological network and one of the area’s cultural centres. Hinging on a historical stratification very similar to the archaeological methods used at the site itself, the permanent exhibition unfolds beneath the palace’s original vaults like the pages of a storybook.

Each of the exhibit rooms features a stratigraphic chart, which bring to light the various historical periods that have shaped the site. The charts show the different functions of the location over the course of time by presenting representative artefacts: from the non-anthropic levels to the establishment and subsequent demolition of the Boswell-Dow brewery, as well as the different periods of European occupation. The exhibit’s spatial itinerary is divided into themes, which are developed through each of the seven vaults and cover all the key aspects of the site’s history including daily life, power, the economy, etc.

Targeting a large audience, the chosen museographic approach favours a dynamic interpretation of history and heritage while using a resolutely contemporary language. In order to highlight the vaults and turn them into the main artefact, the interventions combine minimalist construction and techno-culture. The mapping on the floor, projections, smart board and interactive content on tablets are just some of the technological strategies implemented in order to use contrast to showcase the artefacts unearthed at the site, which date back to the fourteenth century.