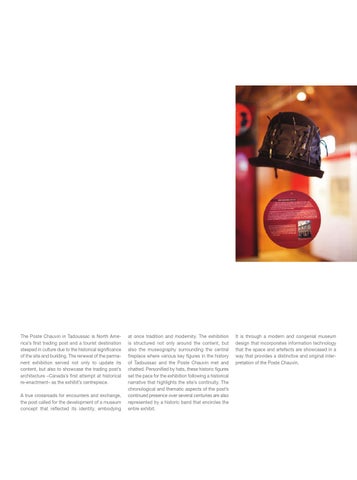 The Poste Chauvin in Tadoussac is North America’s first trading post and a tourist destination steeped in culture due to the historical significance of the site and building. The renewal of the permanent exhibition served not only to update its content, but also to showcase the trading post’s architecture –Canada’s first attempt at historical re-enactment– as the exhibit’s centrepiece. A true crossroads for encounters and exchange, the post called for the development of a museum concept that reflected its identity, embodying

at once tradition and modernity. The exhibition is structured not only around the content, but also the museography surrounding the central fireplace where various key figures in the history of Tadoussac and the Poste Chauvin met and chatted. Personified by hats, these historic figures set the pace for the exhibition following a historical narrative that highlights the site’s continuity. The chronological and thematic aspects of the post’s continued presence over several centuries are also represented by a historic band that encircles the entire exhibit.

It is through a modern and congenial museum design that incorporates information technology that the space and artefacts are showcased in a way that provides a distinctive and original interpretation of the Poste Chauvin.