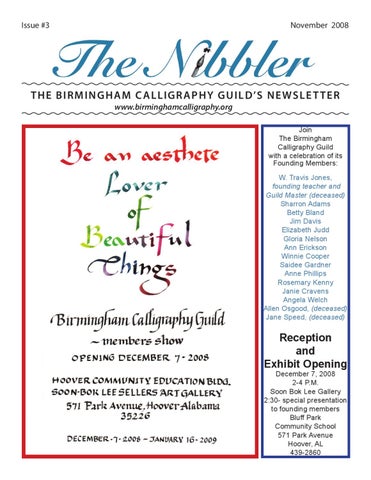 Workshop chairs: Deb Warnat & Suzan Bishop Registration for 2009 workshops will not start until the new year. You will be notiﬁed by email when we will open registration and accept deposits. With such a great lineup you’ll want to act quickly.

Your check is your reservation! Due to rising costs and “back-outs”you are not considered registered for a workshop until your check is received and confirmed. In other words... Money talks!

(You will be refunded your money only if you can be replaced from a waiting list. Please do not find your own replacement until you find out if there is a waiting list for the workshop) Thank you!

All Artwork due for the Exhibit Showing! If you have not already turned in your artwork, please bring to Hoover First United Church on Patton Chapel Road from 6-8 P.M. on Monday, November 24th

*Workdays taught by guild members are free! *Great Newsletter and informational emails are guaranteed! *Access to The B’ham Guild website to list your business and talents *First consideration in signing up for local workshops *Guild supply orders save shipping *Your membership to Association of Calligraphic Arts (ACA) is discounted. ACA members can have their name listed, hyperlink or web page. More information www.calligraphicarts.org

Barbara Barnett and Carol Tillman were star students of bookbinding

A History of the Birmingham Calligraphy Guild-Les Enlumineurs The Birmingham Calligraphy Guild, was started in 1987 at the behest of Mr. W. Travis Jones of Birmingham Alabama, an internationally known calligrapher and illuminator. The purpose of the Guild was and still is to promote, inspire and encourage the fine art of calligraphy. The word “calligraphy” comes from the Greek “kalligraphia,” meaning beautiful writing. Mr. Jones was the teacher of our founding members. The name of the guild, Les Enlumineurs, was conceived by Allen Osgood, who was a charter member. The name, in English, means “the illuminators”. Les Enlumineurs has been honored to have had three past presidents of the International Association of Master Penman, Engrossers and Teachers of Handwriting. The current president, Janie Cravens, is also an early member. Other members of our Guild who have been presidents of the International Association are Travis Jones, Jim Davis and Angela Welch. The guild hosted the 1993 convention in Birmingham and made several innovative changes to the conference which remains in practice today. Many of our members attend this annual conference as well as the annual Americanbased International Conference for Lettering Artists. Mr. Jones taught calligraphy for the Special Studies program at UAB. Allen Osgood and Elizabeth Judd (also a founding member) studied under him at UAB and were instrumental in organizing the early group meetings. Gloria Nelson, Sharron Adams, Betty Bland, Winnie Cooper and Anne Phillips also were early students who remained active and contributed to the planning and building of the Guild. Ann Erickson, Angela Welch, Rosemary Kenney, Jim Davis, Janie Cravens, Saidee Gardner and Jane Speed joined in the first year. Members joining the guild in later years also studied under Mr. Jones. They were Mary Ann Morrow and Eve London. Mr. Jones and Jane Speed and Allen Osgood are now deceased. Early in the 1990’s the Guild began calling experienced calligraphers from outside of Birmingham to teach workshops. Their teachings were instruction on a particular hand. The “hands” included were Italic, Foundational, Old English, Engraver’s Script (Copperplate), Pointed Pen Variations and Spencerian Script. Old English, German and Engrosser’s Script and Engraver’s Script were studied with Mr. Bill Lilly. Some of our members have taken courses individually with Mr. Lilly, who is one of the few remaining graduates of the old and famous Zanerian School of Penmanship in Columbus, Ohio. Some of the most accomplished calligraphers on the continent have come to the Guild to teach and share their knowledge and techniques in workshops hosted by the Guild. They are: Rosemary Buczek, Michael Sull, Martin Jackson, Mark Van Stone, Timothy Botts, Marsha Brady, Eleanor Winters, Mike Kecseg Peter Thornton, Judy Melvin , Sherri

Lovler, Marijo Carney, Gail Vick/Annie Barnhardt, Connie Furguson, Barbara Close, Jean Formo, Joan Merrell, Mary Renshaw and Sherri Kiesel. In June of this year, Annie Cicale and Carol Pallesen presented a week-long workshop on a study of a few international painters and combined the study with a step-by-step book-making project. The guild also studied illumination with Valerie Weilmuenster. Some members have studied with Sheila Waters, one of the most well-known calligraphers today. Pat Blair, a prestigious member of the Washington, D.C. Calligraphy Guild has guided us in the art of pointed pen. This fall was her third visit to Birmingham. For each month of 2009, master teacher Reggie Ezell from Chicago will present a design and lettering course. These teachers and master calligraphers have been listed so that if your interest in calligraphy has been ignited by this show, you can find their exquisite work on the Internet. Meetings are held in months there are no workshops scheduled. The meetings consist of instruction and hands on application in all aspects of lettering and related subjects. Membership includes all skill levels of lettering artists, from the beginner to the most proficient. All are welcome. The Guild is active in the community and invites all who are interested in fine writing to attend either our workshops or meetings. Please see our website, www.birminghamcalligraphy.org for our schedule of workshops, meetings and classes or for more information contact Louise Meredith, 2007-2009 President at loumeredith@bellsouth.net. In 1993, member numbers were about 30. The membership in the guild has increased to 60 in 2008. The members come to Birmingham for various workshops. They travel from Tennessee, Kentucky, Florida, Mississippi, North Carolina and Georgia. We have now become a regional guild.

has as its goals to

A. Present the art of Beautiful Writing this metropolitan community as another of the art forms to be appreciated and enjoyed. B. Present the art of Beautiful Writing to both adults and children; promoting the love of beautiful lettering as well as the skills involved. C. Provide venues for local calligraphers as commercial artists in this community. D. Provide continuing calligraphic instruction and other artistic and craft instruction for the guild memberâ&#x20AC;&#x2122;s personal growth as calligraphers and penmen