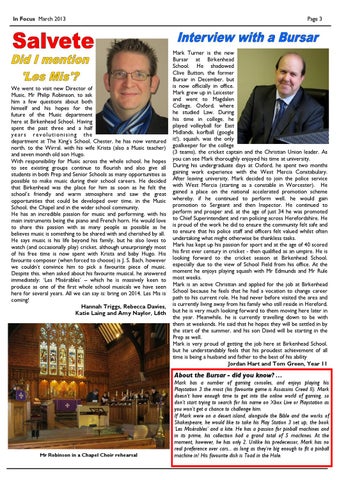 We went to visit new Director of Music, Mr Philip Robinson, to ask him a few questions about both himself and his hopes for the future of the Music department here at Birkenhead School. Having spent the past three and a half years revolutionising the department at The King’s School, Chester, he has now ventured north, to the Wirral, with his wife Krista (also a Music teacher) and seven month old son Hugo. With responsibility for Music across the whole school, he hopes to see existing groups continue to flourish and also give all students in both Prep and Senior Schools as many opportunities as possible to make music during their school careers. He decided that Birkenhead was the place for him as soon as he felt the school’s friendly and warm atmosphere and saw the great opportunities that could be developed over time, in the Music School, the Chapel and in the wider school community. He has an incredible passion for music and performing, with his main instruments being the piano and French horn. He would love to share this passion with as many people as possible as he believes music is something to be shared with and cherished by all. He says music is his life beyond his family, but he also loves to watch (and occasionally play) cricket, although unsurprisingly most of his free time is now spent with Krista and baby Hugo. His favourite composer (when forced to choose) is J. S. Bach, however we couldn’t convince him to pick a favourite piece of music. Despite this, when asked about his favourite musical, he answered immediately: ‘Les Misérables’ – which he is massively keen to produce as one of the first whole school musicals we have seen here for several years. All we can say is: bring on 2014, Les Mis is coming! Hannah Triggs, Rebecca Davies, Katie Laing and Amy Naylor, L6th

Mark Turner is the new Bursar at Birkenhead School. He shadowed Clive Button, the former Bursar in December, but is now officially in office. Mark grew up in Leicester and went to Magdalen College, Oxford, where he studied Law. During his time in college, he played volleyball for East Midlands, korfball (google it!), squash, was the only goalkeeper for the college (3 teams), the cricket captain and the Christian Union leader. As you can see Mark thoroughly enjoyed his time at university. During his undergraduate days at Oxford, he spent two months gaining work experience with the West Mercia Constabulary. After leaving university, Mark decided to join the police service with West Mercia (starting as a constable in Worcester). He gained a place on the national accelerated promotion scheme whereby, if he continued to perform well, he would gain promotion to Sergeant and then Inspector. He continued to perform and prosper and, at the age of just 34 he was promoted to Chief Superintendant and ran policing across Herefordshire. He is proud of the work he did to ensure the community felt safe and to ensure that his police staff and officers felt valued whilst often undertaking what might otherwise be thankless tasks. Mark has kept up his passion for sport and at the age of 40 scored his first ever century in cricket - then qualified as an umpire. He is looking forward to the cricket season at Birkenhead School, especially due to the view of School Field from his office. At the moment he enjoys playing squash with Mr Edmunds and Mr Rule most weeks. Mark is an active Christian and applied for the job at Birkenhead School because he feels that he had a vocation to change career path to his current role. He had never before visited the area and is currently living away from his family who still reside in Hereford, but he is very much looking forward to them moving here later in the year. Meanwhile, he is currently travelling down to be with them at weekends. He said that he hopes they will be settled in by the start of the summer, and his son David will be starting in the Prep as well. Mark is very proud of getting the job here at Birkenhead School, but he understandably feels that his proudest achievement of all time is being a husband and father to the best of his ability Jordan Hart and Tom Green, Year 11

About the Bursar - did you know? …

Mark has a number of gaming consoles, and enjoys playing his Playstation 3 the most (his favourite game is Assassins Creed II). Mark doesn’t have enough time to get into the online world of gaming, so don’t start trying to search for his name on Xbox Live or Playstation as you won’t get a chance to challenge him. If Mark were on a desert island, alongside the Bible and the works of Shakespeare, he would like to take his Play Station 3 set up, the book ‘Les Misérables’ and a kite. He has a passion for pinball machines and in its prime, his collection had a grand total of 5 machines. At the moment, however, he has only 2. Unlike his predecessor, Mark has no real preference over cars... as long as they’re big enough to fit a pinball machine in! His favourite dish is Toad in the Hole. 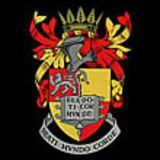 The School's magazine for March 2013.

The School's magazine for March 2013.