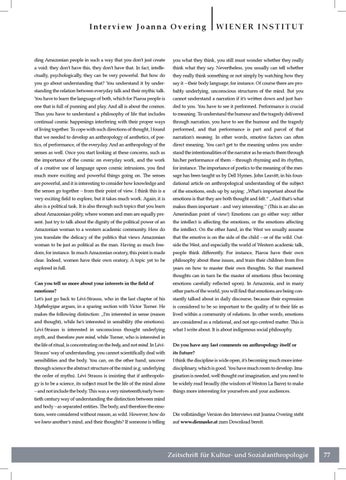 you what they think, you still must wonder whether they really

think what they say. Nevertheless, you usually can tell whether

ctually, psychologically, they can be very powerful. But how do

they really think something or not simply by watching how they

you go about understanding that? You understand it by under-

say it – their body language, for instance. Of course there are pro-

standing the relation between everyday talk and their mythic talk.

bably underlying, unconscious structures of the mind. But you

You have to learn the language of both, which for Piaroa people is

one that is full of punning and play. And all is about the cosmos.

ded to you. You have to see it performed. Performance is crucial

Thus you have to understand a philosophy of life that includes

to meaning. To understand the humour and the tragedy delivered

through narration, you have to see the humour and the tragedy

of living together. To cope with such directions of thought, I found

performed, and that performance is part and parcel of that

that we needed to develop an anthropology of aesthetics, of poe-

narration’s meaning. In other words, emotive factors can often

tics, of performance, of the everyday. And an anthropology of the

direct meaning. You can’t get to the meaning unless you under-

senses as well. Once you start looking at these concerns, such as

stand the intentionalities of the narrator as he enacts them through

the importance of the cosmic on everyday work, and the work

his/her performance of them – through rhyming and its rhythm,

of a creative use of language upon cosmic intrusions, you find

for instance. The importance of poetics to the meaning of the mes-

much more exciting and powerful things going on. The senses

sage has been taught us by Dell Hymes. John Leavitt, in his foun-

are power­ful, and it is interesting to consider how knowledge and

dational article on anthropological understanding of the subject

the senses go together – from their point of view. I think this is a

of the emotions, ends up by saying: „What’s important about the

very exciting field to explore, but it takes much work. Again, it is

emotions is that they are both thought and felt.“ „And that’s what

also is a political task. It is also through such topics that you learn

makes them important – and very interesting.” (This is an also an

about Amazonian polity, where women and men are equally pre-

Amerindian point of view!) Emotions can go either way: either

sent. Just try to talk about the dignity of the political power of an

Amazonian woman to a western academic community. How do

the intellect. On the other hand, in the West we usually assume

you translate the delicacy of the politics that views Amazonian

that the emotive is on the side of the child – or of the wild. Out-

woman to be just as political as the man. Having as much free-

side the West, and especially the world of Western academic talk,

dom, for instance. In much Amazonian oratory, this point is made

people think differently. For instance, Piaroa have their own

clear. Indeed, women have their own oratory. A topic yet to be

philosophy about these issues, and train their children from five

years on how to master their own thoughts. So that mastered thoughts can in turn be the master of emotions (thus becoming

emotions carefully reflected upon). In Amazonia, and in many

other parts of the world, you will find that emotions are being con-

Let’s just go back to Lévi-Strauss, who in the last chapter of his

stantly talked about in daily discourse, because their expression

Mythologique argues, in a sparing section with Victor Turner. He

lived within a community of relations. In other words, emotions

and thought), while he’s interested in sensibility (the emotions).

are considered as a relational, and not ego-centred matter. This is

what I write about. It is about indigenous social philosophy.

myth, and therefore pure mind, while Turner, who is interested in the life of ritual, is concentrating on the body, and not mind. In Lévi-

Do you have any last comments on anthropology itself or

Strauss’ way of understanding, you cannot scientifically deal with

sensibilities and the body. You can, on the other hand, uncover

I think the discipline is wide open, it’s becoming much more inter-

through science the abstract structure of the mind (e.g. underlying

disciplinary, which is good. You have much room to develop. Ima-

the order of myths). Lévi Strauss is insisting that if anthropolo-

gination is needed, well thought out imagination, and you need to

gy is to be a science, its subject must be the life of the mind alone

– and not include the body. This was a very nineteenth/early twen-

things more interesting for yourselves and your audiences.

tieth century way of understanding the distinction between mind and body – as separated entities. The body, and therefore the emotions, were considered without reason, as wild. However, how do

we know another’s mind, and their thoughts? If someone is telling