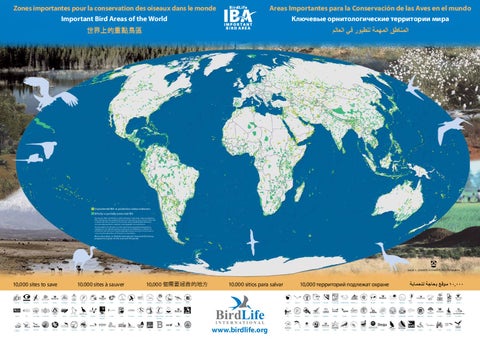 Unprotected IBA or protection status unknown Wholly or partially protected IBA The process of IBA identification is still underway in some areas, including Antarctica, Chile, New Guinea, New Zealand, the USA and in the marine environment. Preliminary or partial information is shown for these areas, where available. While all IBAs are internationally significant, only those meeting global criteria are shown. The presentation of information on this map and the geographical designations employed do not imply the expression of any opinion whatsoever on the part of BirdLife International concerning the legal status of any country, territory or area, or concerning the delimitation of its frontiers or boundaries.

More information on BirdLife International’s Important Bird Areas programme is given on the reverse of this poster.

... are the most significant places for conserving birds

Four categories of criteria are used to identify IBAs consistently worldwide. These are based on the two main considerations used 2 in planning site networks for biodiversity conservation: threat Restricted(category 1) and irreplaceability (categories 2, 3 & 4).

range species Peru those with breeding ranges smaller than 50,000 km2

4 Congregations large aggregations of one or more species

communities of birds characteristic of a distinct biome

Some places are much more important for birds (and other biodiversity) than others. It is effective to focus conservation effort on these places. For IBAs, the distribution of key bird species defines the key sites—discrete areas of habitat that can be delineated and, at least potentially, managed for conservation. Currently, some 10,000 IBAs have been identified worldwide, with global coverage of terrestrial and freshwater environments nearly complete.

... highlight gaps in protected area networks The Programme of Work on Protected Areas of the Convention on Biological Diversity encourages countries to establish and maintain comprehensive and ecologically representative protected area networks. Combining data on IBAs and existing protected areas highlights some of the most important gaps. Despite recent increases, only some 25% of IBAs are fully legally protected.

Evidence shows that IBA networks are disproportionately important for other animals and plants. They are an effective ‘first cut’ of the overall network of Key Biodiversity Areas (KBAs), the most significant sites for biodiversity conservation worldwide. The highest conservation priorities of all KBAs are the Alliance for Zero Extinction sites (AZEs), those holding the last remaining populations of Critically Endangered or Endangered species. Some 600 AZEs have been identified worldwide, of which more than half are also IBAs.

... are also being identified across the oceans

Many seabird breeding sites and significant coastal areas for non-breeding species are already listed as IBAs. Their boundaries are now being extended to include foraging areas, where appropriate. Work is ongoing to identify IBAs (as Ecologically and Biologically Significant Areas—EBSAs) in the open oceans.

... form networks in the wider landscape

The WOW Critical Site Network Tool displaying the network of IBAs identified for Black-tailed Godwit and the flyways of the four relevant populations See www.wingsoverwetlands.org/csntool

Many birds depend on networks of IBAs. Migrants in particular need sites along their flyways to support all stages of their annual cycles. International collaboration, as in the Wings Over Wetlands (WOW) programme for African-Eurasian migratory waterbirds, is vital to achieve this.

... support a wealth of other biodiversity

Wherever possible IBA identification and documentation are led by the BirdLife Partner organisation in-country. This feeds the best local knowledge into the process and builds engagement and capacity for conservation and monitoring. By mid-2010, five continental directories and 126 national IBA inventories had been published, in a variety of languages.

The world’s 10,000 IBAs and their protection status by region

... are documented through a bottom-up process

Management scenarios for African Important Bird Areas, based on the turnover of species projected under climate change

The Integrated Biodiversity Assessment Tool (IBAT) provides decision-makers with critical information so that biodiversity considerations can be integrated at the earliest stages of project planning. Spatial information on IBAs is used by IBAT to help inform environmental impact assessments, management plans and business operations.

IBAs across the world are monitored using BirdLife’s standardised and simple methods for scoring their condition (based on the key species and habitats within them), the pressures (threats) that impact them and the conservation responses in place (such as action plans and management activities). Such monitoring, carried out by local groups, volunteers, government staff and BirdLife Partners, generates data for IBA indices that provide powerful tools for quantifying conservation efforts and measuring their impact.

Some key facts about African LCGs

Important Bird Area indices for Kenya, showing trends in the state of IBAs, pressures upon them, and responses in place

IBA information is relevant to a number of Multilateral Environmental Agreements. For the Ramsar Convention, IBA identification criteria are closely aligned with those used to select wetland sites of international importance. Thus, IBAs that potentially qualify as Ramsar sites, but have yet to be designated, can easily be highlighted. Source: BirdLife International (2005) Important Bird Areas and potential Ramsar sites in Asia. Cambridge, UK: BirdLife International

Understanding the consequences of poverty is essential in identifying how biodiversity conservation can improve local livelihoods. BirdLife Partners work with and empower local communities at IBAs to develop site-specific solutions to conservation and development challenges.

The range of benefits that communities obtain from IBAs Source: www.birdlife.org/sowb

... are a focus for local engagement in conservation Since the late 1990s, BirdLife has been nurturing and networking grassroots groups at IBAs. Numbering over 2,500 worldwide and known as Local Conservation Groups (LCGs), they encourage local participation in conservation and often focus on the most marginalised community members (for example, by formalising land rights for indigenous people, and ensuring that women or members of low status groups are included in decision-making).

... are vital for livelihoods and wellbeing 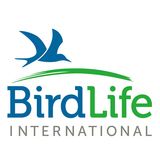 Important Bird Areas of the World

Important Bird Areas of the World