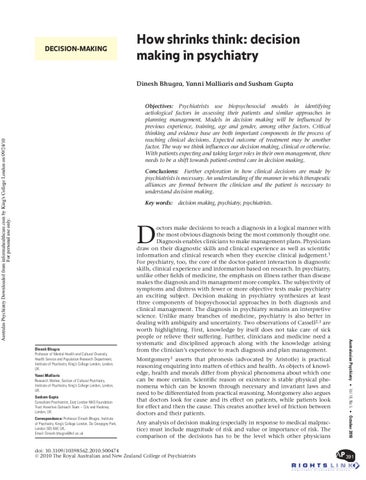 Objectives: Psychiatrists use biopsychosocial models in identifying aetiological factors in assessing their patients and similar approaches in planning management. Models in decision making will be influenced by previous experience, training, age and gender, among other factors. Critical thinking and evidence base are both important components in the process of reaching clinical decisions. Expected outcome of treatment may be another factor. The way we think influences our decision making, clinical or otherwise. With patients expecting and taking larger roles in their own management, there needs to be a shift towards patient-centred care in decision making. Conclusions: Further exploration in how clinical decisions are made by psychiatrists is necessary. An understanding of the manner in which therapeutic alliances are formed between the clinician and the patient is necessary to understand decision making. Key words: decision making, psychiatry, psychiatrists.

Montgomery1 asserts that phronesis (advocated by Aristotle) is practical reasoning enquiring into matters of ethics and health. As objects of knowledge, health and morals differ from physical phenomena about which one can be more certain. Scientific reason or existence is stable physical phenomena which can be known through necessary and invariant laws and need to be differentiated from practical reasoning. Montgomery also argues that doctors look for cause and its effect on patients, while patients look for effect and then the cause. This creates another level of friction between doctors and their patients. Any analysis of decision making (especially in response to medical malpractice) must include magnitude of risk and value or importance of risk. The comparison of the decisions has to be the level which other physicians

octors make decisions to reach a diagnosis in a logical manner with the most obvious diagnosis being the most commonly thought one. Diagnosis enables clinicians to make management plans. Physicians draw on their diagnostic skills and clinical experience as well as scientific information and clinical research when they exercise clinical judgement.1 For psychiatry, too, the core of the doctor-patient interaction is diagnostic skills, clinical experience and information based on research. In psychiatry, unlike other fields of medicine, the emphasis on illness rather than disease makes the diagnosis and its management more complex. The subjectivity of symptoms and distress with fewer or more objective tests make psychiatry an exciting subject. Decision making in psychiatry synthesizes at least three components of biopsychosocial approaches in both diagnosis and clinical management. The diagnosis in psychiatry remains an interpretive science. Unlike many branches of medicine, psychiatry is also better in dealing with ambiguity and uncertainty. Two observations of Cassell2,3 are worth highlighting. First, knowledge by itself does not take care of sick people or relieve their suffering. Further, clinicians and medicine need a systematic and disciplined approach along with the knowledge arising from the clinician’s experience to reach diagnosis and plan management.

Critical thinking is purposeful thinking according to Gambrill6 and includes characteristics such as clear, precise, specific, accurate, relevant, consistent, logical, deep, complete, significant, adequate and fair. More than other branches of medicine, psychiatry in its management and diagnostic portfolio includes proximal context (i.e. family, housing, socioeconomic and employment factors) and distal context (society, culture, kinship). Often these contexts get forgotten when decisions are being made. Gusfield7 notes that the concept of social problem is unique to modern society and is a category through which things can be seen and can be changed through social actions.

would have used in similar circumstances.4 Burstajn et al.4 propose that personality, emotional, cognitive and philosophical factors are all part of any decision-making process. Gibbs and Gambrill5 suggest that, among various criteria for decision making, intuition, experience, personal style, reports by patients, familiarity and professional literature all need to be explored. Gambrill6 points out that avoidable (medical) errors are common and can be diagnostic (delay, inadequate, outdated investigations), management or ‘managerial’ (delay or error in treatment), preventive (failure or inadequate monitoring) and other (failure of communication, equipment of systems).

Other biasing factors in decision making according to Gambrill6 include premature closure in exploring problems. There are also rigid beliefs, preferred views of clients, technology used, status and power differences between the patient and the clinician, time pressures, and beliefs about the importance of different kinds of task. It is inevitable that when the decision maker is focused on one of these factors either due to training, experience or interest, they are likely to follow that trail. Thus, the person making the decision may have ‘power’ in an agency and is keen to retain it and any decision to be made follows this pathway. Sometimes, clinical decisions are influenced by available resources. It is possible that other personal factors on the part of the clinician that influence any decision making are related to age, gender and experience. Psychological factors involved in making decisions include personal beliefs, goals perceived for outcome, strategies used to process information and assessment. Reasoning (reaching decisions in a rational way) is the conversion of unconscious judgements, feelings and knowledge into something more explicit.8 Clinical reasoning relies on repeated questioning of the decision, looking for evidence to uphold or change the decision, asking the right questions to explore the alternatives and using research evidence to support or abandon these decisions. Invariably, there will be differences in making decisions between clinicians, depending upon skills and knowledge on the one hand and experience and ability to explore alternatives on the other. Reasoning while reaching a decision varies according to using a causal explanation or a process of exclusion.9 Doctors carry

several thousand decision-making configurations in their head in order to function successfully as experts.10 Clinicians may well use deductive algorithms as evidenced by various guidelines even when the individual response may not always match the guidelines. Clinical experience and research can be depicted as the two poles of medicine’s practical knowing.1 Uncertainty in solving a problem may be due to a number of factors: lack of knowledge, lack of expertise, nature of the problem, rarity of the problem, outcomes expected or reached, poor motivation and factors such as employment, poverty, housing, family and society and cultural values. Common faults in thinking include hasty thinking, narrow thinking, fuzzy thinking and sprawling thinking.11 In psychiatry, as the model to reach a decision is biopsychosocial and sometimes sociological, anthropological or spiritual factors are added to it, the task is to discover how clinicians weigh their decisions. How much weight is given to biological factors in comparison with psychological or social factors in reaching clinical decisions is not always clear. In an ongoing study of psychiatrists of various degrees of experience, only two out of 32 acknowledged that they would use the evidence base to make decisions. The rest rely on their gut feeling or experience or training or personal views. They may use one of the three models, but the decision to give weight to one over the other relies on more than simple gut feeling. Clinicians reach clinical judgements either by generalizing or by particularizing the symptoms with which they are faced.12 Decision making in medicine relies on problem solving through generating hypotheses (generally four or five) and then by discarding them one by one or using a judgement based approach.13 In psychiatry, this judgement approach becomes much more problematic because, in assessment, cues given by the patient relating to dress, language, insight etc may be associated with cultural and ethnic factors, thereby producing prejudicial observations and interpretations. The training in reaching decisions can be taught – often in medical schools, students learn this by observation. Any decision is dependent upon complexity of the symptoms and perception of the complexity. Patients’ experience of illness needs to be understood in the context of clinicians’ experience of disease. When working in multidisciplinary teams, the nature of decision making changes as well. The nature of group dynamics within a team, the nature of the team and team work will influence how decisions are made and must be taken into account when studying the decision-making processes and strategies. Thinking and deciding are linked. Baron14 argues that the way we think affects the way we plan our lives, our personal goals and the decisions made. Perhaps more importantly, the way decisions are reached is also imperative to understand. Baron14 proposes that three basic types of thinking are required to achieve goals: thinking about decisions, thinking about beliefs and

The analysis of decision making in psychiatry relies on a number of factors: thinking, knowledge, skills, beliefs and personal strategies of analysis such as cognitive underpinnings. Errors in psychiatric practice are made due to a number of factors. Gambrill6 includes overconfidence and cognitive conservatism among the reasons for errors. There are, of course, errors of commission and errors of omission. Popper15 acknowledges that mistakes will be made, but the tasks are to minimize avoidable mistakes, to learn to do better, to recognize mistakes and to use a self-critical approach to move forward. Unavoidable mistakes are unanticipated and occur in spite of better available knowledge and critical thinking skills. In the 21st century, clinical decision making in psychiatry must be studied. The decision-making process, reasons and logic of reasoning on the part of the clinician, and the views, expected outcomes and beliefs of the patient, on the other hand, have to be looked into. The primacy of patient welfare is important in clinical practice, and understanding the components of how

clinical decisions in psychiatry are reached can only add to patient welfare. DISCLOSURE The authors report no conﬂicts of interest. The authors alone are responsible for the content and writing of the paper.

thinking about our goals themselves. Therefore, when a clinician is reaching a decision about a condition, they bring into the process their thinking about the outcome of treatment. The involvement of the patient in reaching a decision is also significant. With increased access to knowledge through the internet, media and other resources, the unequal power in the therapeutic relationship which previously lay with the clinician has become less unequal. Under these changing circumstances, the patient’s involvement in helping the clinician make the decision also changes. The other variable in this equation is the patient’s and the society’s demands rather than needs, reflecting a consumerist perspective. 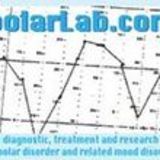