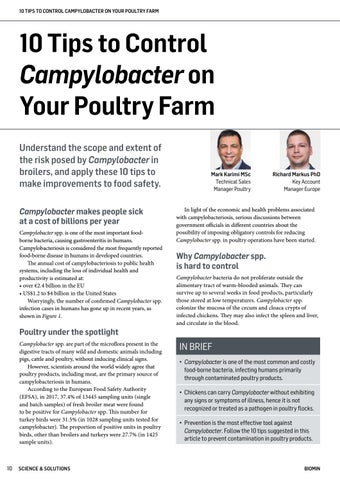 10 TIPS TO CONTROL CAMPYLOBACTER ON YOUR POULTRY FARM

10 Tips to Control Campylobacter on Your Poultry Farm Understand the scope and extent of the risk posed by Campylobacter in broilers, and apply these 10 tips to make improvements to food safety. Campylobacter makes people sick at a cost of billions per year Campylobacter spp. is one of the most important foodborne bacteria, causing gastroenteritis in humans. Campylobacteriosis is considered the most frequently reported food-borne disease in humans in developed countries. The annual cost of campylobacteriosis to public health systems, including the loss of individual health and productivity is estimated at: • over €2.4 billion in the EU • US$1.2 to $4 billion in the United States Worryingly, the number of confirmed Campylobacter spp. infection cases in humans has gone up in recent years, as shown in Figure 1.

Poultry under the spotlight Campylobacter spp. are part of the microflora present in the digestive tracts of many wild and domestic animals including pigs, cattle and poultry, without inducing clinical signs. However, scientists around the world widely agree that poultry products, including meat, are the primary source of campylobacteriosis in humans. According to the European Food Safety Authority (EFSA), in 2017, 37.4% of 13445 sampling units (single and batch samples) of fresh broiler meat were found to be positive for Campylobacter spp. This number for turkey birds were 31.5% (in 1028 sampling units tested for campylobacter). The proportion of positive units in poultry birds, other than broilers and turkeys were 27.7% (in 1425 sample units).

In light of the economic and health problems associated with campylobacteriosis, serious discussions between government officials in different countries about the possibility of imposing obligatory controls for reducing Campylobacter spp. in poultry operations have been started.

Why Campylobacter spp. is hard to control Campylobacter bacteria do not proliferate outside the alimentary tract of warm-blooded animals. They can survive up to several weeks in food products, particularly those stored at low temperatures. Campylobacter spp. colonize the mucosa of the cecum and cloaca crypts of infected chickens. They may also infect the spleen and liver, and circulate in the blood.

IN BRIEF • Campylobacter is one of the most common and costly food-borne bacteria, infecting humans primarily through contaminated poultry products. • Chickens can carry Campylobacter without exhibiting any signs or symptoms of illness, hence it is not recognized or treated as a pathogen in poultry flocks. • Prevention is the most effective tool against Campylobacter. Follow the 10 tips suggested in this article to prevent contamination in poultry products. 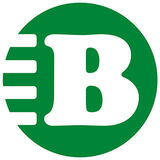 In this issue: How to Improve Poultry Drinking Water Quality with Acidification; 10 Tips to Control Campylobacter on Your Poultry Farm; Prov...

In this issue: How to Improve Poultry Drinking Water Quality with Acidification; 10 Tips to Control Campylobacter on Your Poultry Farm; Prov...