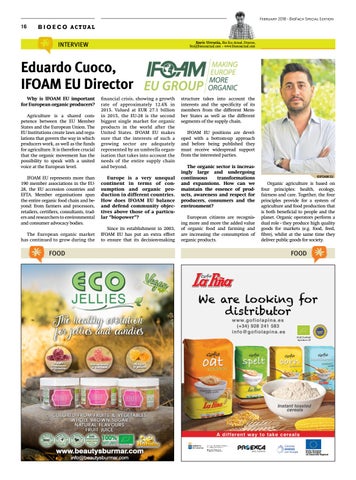 Eduardo Cuoco, IFOAM EU Director Why is IFOAM EU important for European organic producers? Agriculture is a shared competence between the EU Member States and the European Union. The EU Institutions create laws and regulations that govern the way in which producers work, as well as the funds for agriculture. It is therefore crucial that the organic movement has the possibility to speak with a united voice at the European level. IFOAM EU represents more than 190 member associations in the EU28, the EU accession countries and EFTA. Member organisations span the entire organic food chain and beyond: from farmers and processors, retailers, certifiers, consultants, traders and researchers to environmental and consumer advocacy bodies. The European organic market has continued to grow during the

financial crisis, showing a growth rate of approximately 12.6% in 2015. Valued at EUR 27.1 billion in 2015, the EU-28 is the second biggest single market for organic products in the world after the United States. IFOAM EU makes sure that the interests of such a growing sector are adequately represented by an umbrella organisation that takes into account the needs of the entire supply chain and beyond. Europe is a very unequal continent in terms of consumption and organic production in different countries. How does IFOAM EU balance and defend community objectives above those of a particular “biopower”? Since its establishment in 2003, IFOAM EU has put an extra effort to ensure that its decision-making

structure takes into account the interests and the specificity of its members from the different Member States as well as the different segments of the supply chain. IFOAM EU positions are developed with a bottom-up approach and before being published they must receive widespread support from the interested parties. The organic sector is increasingly large and undergoing continuous transformations and expansions. How can we maintain the essence of products, awareness and respect for producers, consumers and the environment? European citizens are recognising more and more the added value of organic food and farming and are increasing the consumption of organic products.

Organic agriculture is based on four principles: health, ecology, fairness and care. Together, the four principles provide for a system of agriculture and food production that is both beneficial to people and the planet. Organic operators perform a dual role - they produce high quality goods for markets (e.g. food, feed, fibre), whilst at the same time they deliver public goods for society. 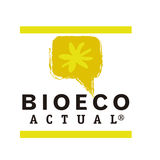