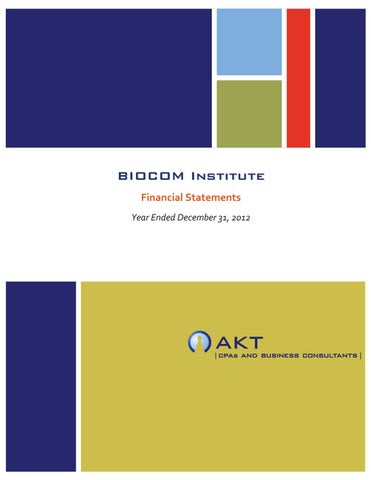 Schedule of Expenditures of Federal Awards

Note to Schedule of Expenditures of Federal Awards

Schedule of Findings and Questioned Costs

Schedule of Prior Audit Findings

Opinion In our opinion, the financial statements referred to above present fairly, in all material respects, the financial position of BIOCOM Institute as of December 31, 2012, and the changes in its net assets and its cash flows for the years then ended in conformity with accounting principles generally accepted in the United States of America.

Temporarily restricted net assets consist of contributed funds subject to donor-imposed restrictions contingent upon specific performance of a future event or a specific passage of time before the Institute may spend the funds.

Permanently restricted net assets are subject to irrevocable donor restrictions requiring that the assets be maintained in perpetuity usually for the purpose of generating investment income to fund current operations.

There were no temporarily or permanently restricted net assets as of December 31, 2012. Accounts Receivable The accounts receivable arise in the normal course of operations. It is the policy of management to review the outstanding accounts receivable at year end, as well as the bad debt write-offs experienced in the past, and establish an allowance for doubtful accounts for uncollectible amounts. No allowance for doubtful accounts was recorded for the year ended December 31, 2012 because management believes all amounts are collectible. Property and Equipment Property and equipment is carried at cost or, if donated, at the approximate fair value at the date of donation. The Institute capitalizes expenditures in excess of $500. Depreciation is computed using the straight-line method over the useful lives of the assets of three to five years. Revenue and Support Contributions received are recorded as unrestricted, temporarily restricted, or permanently restricted support, depending on the existence and/or nature of any donor restrictions. All donor-restricted support is reported as an increase in temporarily or permanently restricted net assets, depending on the nature of the restriction. When a restriction expires (that is, when a stipulated time restriction ends or purpose restriction is accomplished), temporarily restricted net assets are reclassified to unrestricted net assets and reported in the statements of activities as net assets released from restrictions. Contributions received with donor-imposed restrictions that are satisfied within the same reporting period are reported as unrestricted support in that period. Contributed Materials and Services Contributed goods are recorded at their estimated fair market value at the time of donation. Such items are capitalized or charged to operations as appropriate. The fair market value of contributed professional services is reported as support and expense in the period in which the services are performed. The Institute receives donated services from a variety of unpaid volunteers. No amounts have been recognized in the financial statements because the criteria for recognition as contributions of such volunteer effort have not been satisfied.

Note 1 – Institute and Summary of Significant Accounting Policies, continued Use of Estimates The preparation of financial statements in conformity with generally accepted accounting principles requires management to make estimates and assumptions that affect certain reported amounts and disclosures. Accordingly, actual results could differ from those estimates. Income Taxes The Institute is exempt from income taxes under Section 501(c)(3) of the Internal Revenue Code and Section 23701(d) of the California Revenue and Taxation Code. The Institute has been determined by the Internal Revenue Service not to be a private foundation within the meaning of Section 509(a) of the Internal Revenue Code. The Institute may be subject to tax on income which is not related to its exempt purpose. For the year ended December 31, 2012, no such unrelated business income was reported and, therefore, no provision for income taxes has been made. The Institute follows the provisions of uncertain tax positions as addressed in FASB Accounting Standards Codification. The Institute recognizes accrued interest and penalties associated with uncertain tax positions as part of the income tax provision, when applicable. There are no amounts accrued in the financial statements related to uncertain tax positions for the years ended December 31, 2012. The Institute files informational and income tax returns in the United States and various state and local jurisdictions. The Institute’s Federal income tax and informational returns for the years ended December 31, 2012, 2011 and 2010 are subject to examination by the Internal Revenue Service, generally for 3 years after the returns were filed. State and local jurisdictions have statutes of limitation that generally range from 3 to 5 years. Subsequent Events The Institute has evaluated subsequent events through June 28, 2013, which is the date the financial statements were available to be issued.

Note 2 – Concentrations of Credit Risk Cash The Institute maintains its cash in bank deposit accounts that are either insured by the Federal Deposit Insurance Corporation (FDIC) up to a limit of $250,000 per depositor or certain non-interest bearing accounts that are fully insured by the FDIC. At December 31, 2012, the Institute did not have any cash that was exposed to uninsured deposit risk. Effective January 1, 2013, the FDIC coverage is limited to $250,000 per depositor per financial institution. Revenue The Institute received a substantial portion of its funding from two sources, the San Diego Workforce Partnership and the SDSU Research Foundation. During the year ended December 31, 2012, funding from these sources totaled approximately $958,000 (88% of revenue). At December 31, 2012 amounts due from these funding sources included in accounts receivable were approximately $422,000 (98% of accounts receivable). The support received from governmental grants from the San Diego Workforce Partnership and the SDSU Research Foundation are subject to audits by the grantor agencies. The ultimate determinations of amounts received under these programs are generally based upon allowable costs reported to and audited by the grantor agency. Until such audits are completed, there exists the contingency to refund any amounts received in excess of the allowable costs.

Note 5 – Functional Allocation of Expenses The costs of providing the various programs and activities have been summarized on a functional basis in the statements of activities. Accordingly, certain costs have been allocated among the programs and supporting services benefited.