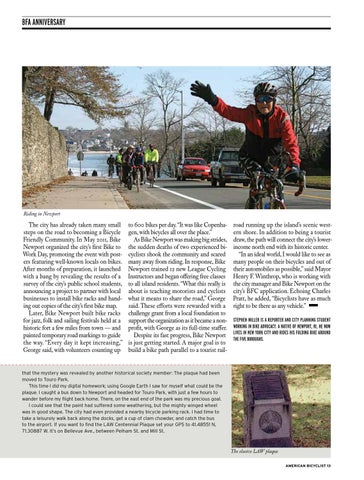 The city has already taken many small steps on the road to becoming a Bicycle Friendly Community. In May 2011, Bike Newport organized the city’s first Bike to Work Day, promoting the event with posters featuring well-known locals on bikes. After months of preparation, it launched with a bang by revealing the results of a survey of the city’s public school students, announcing a project to partner with local businesses to install bike racks and handing out copies of the city’s first bike map. Later, Bike Newport built bike racks for jazz, folk and sailing festivals held at a historic fort a few miles from town — and painted temporary road markings to guide the way. “Every day it kept increasing,” George said, with volunteers counting up

to 600 bikes per day. “It was like Copenha- road running up the island’s scenic westgen, with bicycles all over the place.” ern shore. In addition to being a tourist As Bike Newport was making big strides, draw, the path will connect the city’s lowerthe sudden deaths of two experienced bi- income north end with its historic center. cyclists shook the community and scared “In an ideal world, I would like to see as many away from riding. In response, Bike many people on their bicycles and out of Newport trained 12 new League Cycling their automobiles as possible,” said Mayor Instructors and began offering free classes Henry F. Winthrop, who is working with to all island residents. “What this really is the city manager and Bike Newport on the about is teaching motorists and cyclists city’s BFC application. Echoing Charles what it means to share the road,” George Pratt, he added, “Bicyclists have as much said. These efforts were rewarded with a right to be there as any vehicle.” challenge grant from a local foundation to support the organization as it became a non- Stephen Miller is a reporter and city planning student profit, with George as its full-time staffer. working in bike advocacy. A native of Newport, RI, he now Despite its fast progress, Bike Newport lives in New York City and rides his folding bike around the five boroughs. is just getting started. A major goal is to build a bike path parallel to a tourist rail-

that the mystery was revealed by another historical society member: The plaque had been moved to Touro Park. This time I did my digital homework; using Google Earth I saw for myself what could be the plaque. I caught a bus down to Newport and headed for Touro Park, with just a few hours to wander before my flight back home. There, on the east end of the park was my precious goal. I could see that the paint had suffered some weathering, but the mighty winged wheel was in good shape. The city had even provided a nearby bicycle parking rack. I had time to take a leisurely walk back along the docks, get a cup of clam chowder, and catch the bus to the airport. If you want to find the LAW Centennial Plaque set your GPS to 41.48551 N, 71.30887 W. It’s on Bellevue Ave., between Pelham St. and Mill St. 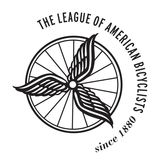 The first issue of the newly redesigned American Bicyclist showcases the 10th anniversary of the League's signature Bicycle Friendly America...

The first issue of the newly redesigned American Bicyclist showcases the 10th anniversary of the League's signature Bicycle Friendly America...