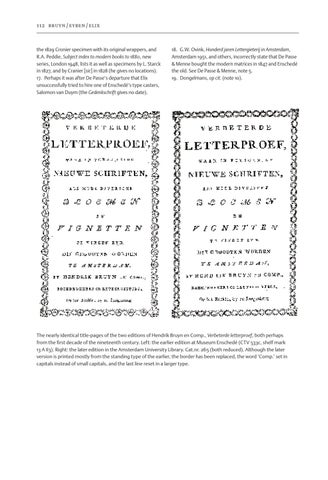 the 1829 Cronier specimen with its original wrappers, and R.A. Peddie, Subject index to modern books to 1880, new series, London 1948, lists it as well as specimens by L. Starck in 1827, and by Cranier [sic] in 1828 (he gives no locations). 17. Perhaps it was after De Passe’s departure that Elix unsuccessfully tried to hire one of Enschedé’s type casters, Salomon van Duym (the Gedenkschrift gives no date).

The nearly identical title-pages of the two editions of Hendrik Bruyn en Comp., Verbeterde letterproef, both perhaps from the first decade of the nineteenth century. Left: the earlier edition at Museum Enschedé (CTV 533c, shelf mark 13 A II3). Right: the later edition in the Amsterdam University Library. Cat.nr. 265 (both reduced). Although the later version is printed mostly from the standing type of the earlier, the border has been replaced, the word ‘Comp.’ set in capitals instead of small capitals, and the last line reset in a larger type.

John A. Lane, Mathieu Lommen & Johan de Zoete, Dutch typefounders’ specimens from the Library of the kvb and other collections in the Amsterdam University Library with histories of the firms represented. Amsterdam 1998. Allard Pierson - The collections of the University of Amsterdam