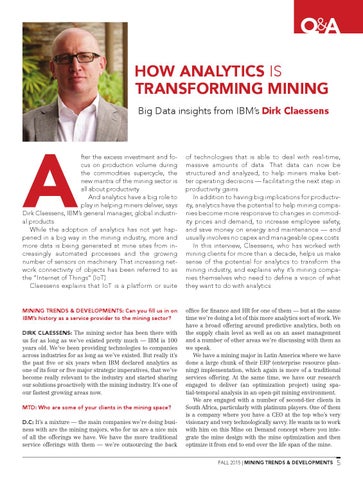 Q&amp;A HOW ANALYTICS IS TRANSFORMING MINING

fter the excess investment and focus on production volume during the commodities supercycle, the new mantra of the mining sector is all about productivity. And analytics have a big role to play in helping miners deliver, says Dirk Claessens, IBM’s general manager, global industrial products. While the adoption of analytics has not yet happened in a big way in the mining industry, more and more data is being generated at mine sites from increasingly automated processes and the growing number of sensors on machinery. That increasing network connectivity of objects has been referred to as the “Internet of Things” (IoT). Claessens explains that IoT is a platform or suite

of technologies that is able to deal with real-time, massive amounts of data. That data can now be structured and analyzed, to help miners make better operating decisions — facilitating the next step in productivity gains. In addition to having big implications for productivity, analytics have the potential to help mining companies become more responsive to changes in commodity prices and demand, to increase employee safety, and save money on energy and maintenance — and usually involves no capex and manageable opex costs. In this interview, Claessens, who has worked with mining clients for more than a decade, helps us make sense of the potential for analytics to transform the mining industry, and explains why it’s mining companies themselves who need to define a vision of what they want to do with analytics.

MINING TRENDS &amp; DEVELOPMENTS: Can you fill us in on IBM’s history as a service provider to the mining sector?

office for finance and HR for one of them — but at the same time we’re doing a lot of this more analytics sort of work. We have a broad offering around predictive analytics, both on the supply chain level as well as on an asset management and a number of other areas we’re discussing with them as we speak. We have a mining major in Latin America where we have done a large chunk of their ERP (enterprise resource planning) implementation, which again is more of a traditional services offering. At the same time, we have our research engaged to deliver (an optimization project) using spatial-temporal analysis in an open-pit mining environment. We are engaged with a number of second-tier clients in South Africa, particularly with platinum players. One of them is a company where you have a CEO at the top who’s very visionary and very technologically savvy. He wants us to work with him on this Mine on Demand concept where you integrate the mine design with the mine optimization and then optimize it from end to end over the life span of the mine.

DIRK CLAESSENS: The mining sector has been there with us for as long as we’ve existed pretty much — IBM is 100 years old. We’ve been providing technologies to companies across industries for as long as we’ve existed. But really it’s the past five or six years when IBM declared analytics as one of its four or five major strategic imperatives, that we’ve become really relevant to the industry and started sharing our solutions proactively with the mining industry. It’s one of our fastest growing areas now. MTD: Who are some of your clients in the mining space? D.C: It’s a mixture — the main companies we’re doing business with are the mining majors, who for us are a nice mix of all the offerings we have. We have the more traditional service offerings with them — we’re outsourcing the back