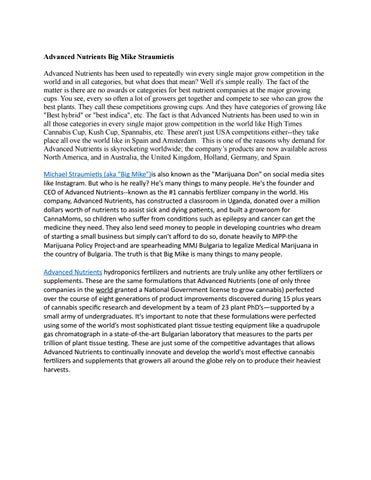 Advanced Nutrients Big Mike Straumietis Advanced Nutrients has been used to repeatedly win every single major grow competition in the world and in all categories, but what does that mean? Well it&#39;s simple really. The fact of the matter is there are no awards or categories for best nutrient companies at the major growing cups. You see, every so often a lot of growers get together and compete to see who can grow the best plants. They call these competitions growing cups. And they have categories of growing like &quot;Best hybrid&quot; or &quot;best indica&quot;, etc. The fact is that Advanced Nutrients has been used to win in all those categories in every single major grow competition in the world like High Times Cannabis Cup, Kush Cup, Spannabis, etc. These aren&#39;t just USA competitions either--they take place all ove the world like in Spain and Amsterdam. This is one of the reasons why demand for Advanced Nutrients is skyrocketing worldwide; the company’s products are now available across North America, and in Australia, the United Kingdom, Holland, Germany, and Spain. Michael Straumietis (aka &quot;Big Mike&quot;)is also known as the &quot;Marijuana Don&quot; on social media sites like Instagram. But who is he really? He&#39;s many things to many people. He&#39;s the founder and CEO of Advanced Nutrients--known as the #1 cannabis fertilizer company in the world. His company, Advanced Nutrients, has constructed a classroom in Uganda, donated over a million dollars worth of nutrients to assist sick and dying patients, and built a growroom for CannaMoms, so children who suffer from conditions such as epilepsy and cancer can get the medicine they need. They also lend seed money to people in developing countries who dream of starting a small business but simply can&#39;t afford to do so, donate heavily to MPP-the Marijuana Policy Project-and are spearheading MMJ Bulgaria to legalize Medical Marijuana in the country of Bulgaria. The truth is that Big Mike is many things to many people. Advanced Nutrients hydroponics fertilizers and nutrients are truly unlike any other fertilizers or supplements. These are the same formulations that Advanced Nutrients (one of only three companies in the world granted a National Government license to grow cannabis) perfected over the course of eight generations of product improvements discovered during 15 plus years of cannabis specific research and development by a team of 23 plant PhD’s—supported by a small army of undergraduates. It&#39;s important to note that these formulations were perfected using some of the world’s most sophisticated plant tissue testing equipment like a quadrupole gas chromatograph in a state-of-the-art Bulgarian laboratory that measures to the parts per trillion of plant tissue testing. These are just some of the competitive advantages that allows Advanced Nutrients to continually innovate and develop the world&#39;s most effective cannabis fertilizers and supplements that growers all around the globe rely on to produce their heaviest harvests.

Our Purpose At Advanced Nutrients Is Simple: To Make The World Passionate About Growing Plants Hydroponically. "Big Mike Straumietis" 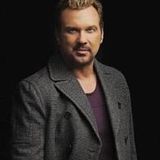