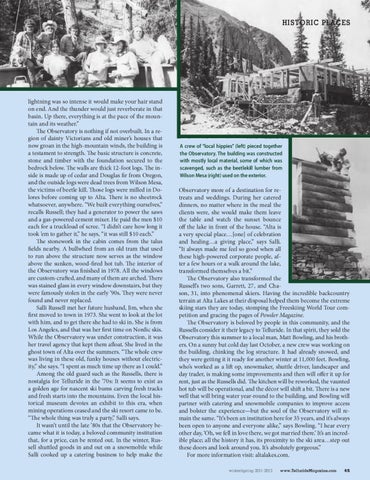 lightning was so intense it would make your hair stand on end. And the thunder would just reverberate in that basin. Up there, everything is at the pace of the mountain and its weather.” The Observatory is nothing if not overbuilt. In a region of dainty Victorians and old miner’s houses that now groan in the high-mountain winds, the building is a testament to strength. The basic structure is concrete, stone and timber with the foundation secured to the bedrock below. The walls are thick 12-foot logs. The inside is made up of cedar and Douglas fir from Oregon, and the outside logs were dead trees from Wilson Mesa, the victims of beetle kill. Those logs were milled in Dolores before coming up to Alta. There is no sheetrock whatsoever, anywhere. “We built everything ourselves,” recalls Russell; they had a generator to power the saws and a gas-powered cement mixer. He paid the men $10 each for a truckload of scree. “I didn’t care how long it took ’em to gather it,” he says, “it was still $10 each.” The stonework in the cabin comes from the talus fields nearby. A bullwheel from an old tram that used to run above the structure now serves as the window above the sunken, wood-fired hot tub. The interior of the Observatory was finished in 1978. All the windows are custom-crafted, and many of them are arched. There was stained glass in every window downstairs, but they were famously stolen in the early ’90s. They were never found and never replaced. Salli Russell met her future husband, Jim, when she first moved to town in 1973. She went to look at the lot with him, and to get there she had to ski in. She is from Los Angeles, and that was her first time on Nordic skis. While the Observatory was under construction, it was her travel agency that kept them afloat. She lived in the ghost town of Alta over the summers. “The whole crew was living in these old, funky houses without electricity,” she says. “I spent as much time up there as I could.” Among the old guard such as the Russells, there is nostalgia for Telluride in the ’70s: It seems to exist as a golden age for nascent ski bums carving fresh tracks and fresh starts into the mountains. Even the local historical museum devotes an exhibit to this era, when mining operations ceased and the ski resort came to be. “The whole thing was truly a party,” Salli says. It wasn’t until the late ’80s that the Observatory became what it is today, a beloved community institution that, for a price, can be rented out. In the winter, Russell shuttled goods in and out on a snowmobile while Salli cooked up a catering business to help make the

A crew of “local hippies” (left) pieced together the Observatory. The building was constructed with mostly local material, some of which was scavenged, such as the beetlekill lumber from Wilson Mesa (right) used on the exterior.

Observatory more of a destination for retreats and weddings. During her catered dinners, no matter where in the meal the clients were, she would make them leave the table and watch the sunset bounce off the lake in front of the house. “Alta is a very special place…[one] of celebration and healing…a giving place,” says Salli. “It always made me feel so good when all these high-powered corporate people, after a few hours or a walk around the lake, transformed themselves a bit.” The Observatory also transformed the Russell’s two sons, Garrett, 27, and Chason, 31, into phenomenal skiers. Having the incredible backcountry terrain at Alta Lakes at their disposal helped them become the extreme skiing stars they are today, stomping the Freeskiing World Tour competition and gracing the pages of Powder Magazine. The Observatory is beloved by people in this community, and the Russells consider it their legacy to Telluride. In that spirit, they sold the Observatory this summer to a local man, Matt Bowling, and his brothers. On a sunny but cold day last October, a new crew was working on the building, chinking the log structure. It had already snowed, and they were getting it it ready for another winter at 11,000 feet. Bowling, who’s worked as a lift op, snowmaker, shuttle driver, landscaper and day trader, is making some improvements and then will offer it up for rent, just as the Russells did. The kitchen will be reworked, the vaunted hot tub will be operational, and the décor will shift a bit. There is a new well that will bring water year-round to the building, and Bowling will partner with catering and snowmobile companies to improve access and bolster the experience—but the soul of the Observatory will remain the same. “It’s been an institution here for 35 years, and it’s always been open to anyone and everyone alike,” says Bowling. “I hear every other day, ‘Oh, we fell in love there, we got married there.’ It’s an incredible place; all the history it has, its proximity to the ski area…step out these doors and look around you. It’s absolutely gorgeous.” For more information visit: altalakes.com. winter/spring 2011-2012