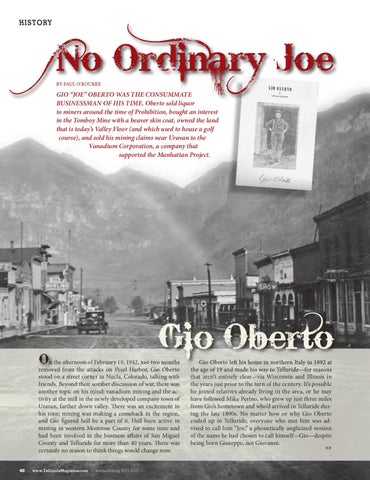 GIO “JOE” OBERTO WAS THE CONSUMMATE BUSINESSMAN OF HIS TIME. Oberto sold liquor to miners around the time of Prohibition, bought an interest in the Tomboy Mine with a beaver skin coat, owned the land that is today’s Valley Floor (and which used to house a golf course), and sold his mining claims near Uravan to the Vanadium Corporation, a company that supported the Manhattan Project.

n the afternoon of February 10, 1942, just two months removed from the attacks on Pearl Harbor, Gio Oberto stood on a street corner in Nucla, Colorado, talking with friends. Beyond their somber discussion of war, there was another topic on his mind: vanadium mining and the activity at the mill in the newly developed company town of Uravan, farther down valley. There was an excitement in his tone; mining was making a comeback in the region, and Gio figured he’d be a part of it. He’d been active in mining in western Montrose County for some time and had been involved in the business affairs of San Miguel County and Telluride for more than 40 years. There was certainly no reason to think things would change now. 40

Gio Oberto left his home in northern Italy in 1892 at the age of 19 and made his way to Telluride—for reasons that aren’t entirely clear—via Wisconsin and Illinois in the years just prior to the turn of the century. It’s possible he joined relatives already living in the area, or he may have followed Mike Perino, who grew up just three miles from Gio’s hometown and who’d arrived in Telluride during the late 1890s. No matter how or why Gio Oberto ended up in Telluride, everyone who met him was advised to call him “Joe,” a phonetically anglicized version of the name he had chosen to call himself—Gio—despite being born Giuseppe, not Giovanni. &gt;&gt;