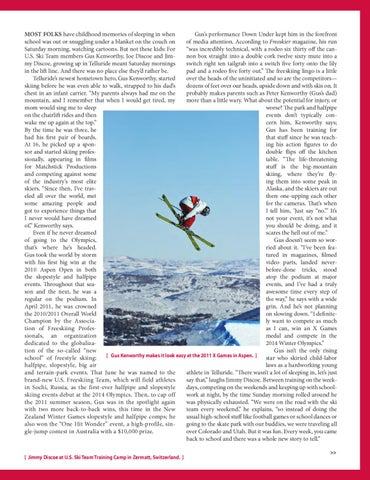 Most folks have childhood memories of sleeping in when Gus’s performance Down Under kept him in the forefront school was out or snuggling under a blanket on the couch on of media attention. According to Freeskier magazine, his run Saturday morning, watching cartoons. But not these kids: For “was incredibly technical, with a rodeo six thirty off the canU.S. Ski Team members Gus Kenworthy, Joe Discoe and Jimnon box straight into a double cork twelve sixty mute into a my Discoe, growing up in Telluride meant Saturday mornings switch right ten tailgrab into a switch five forty onto the lily in the lift line. And there was no place else they’d rather be. pad and a rodeo five forty out.” The freeskiing lingo is a little Telluride’s newest hometown hero, Gus Kenworthy, started over the heads of the uninitiated and so are the competitors— skiing before he was even able to walk, strapped to his dad’s dozens of feet over our heads, upside down and with skis on. It chest in an infant carrier. “My parents always had me on the probably makes parents such as Peter Kenworthy (Gus’s dad) mountain, and I remember that when I would get tired, my more than a little wary. What about the potential for injury, or mom would sing me to sleep worse? The park and halfpipe on the chairlift rides and then events don’t typically conwake me up again at the top.” cern him, Kenworthy says; By the time he was three, he Gus has been training for had his first pair of boards. that stuff since he was teachAt 16, he picked up a sponing his action figures to do sor and started skiing profesdouble flips off the kitchen sionally, appearing in films table. “The life-threatening for Matchstick Productions stuff is the big-mountain and competing against some skiing, where they’re flyof the industry’s most elite ing them into some peak in skiers. “Since then, I’ve travAlaska, and the skiers are out eled all over the world, met there one-upping each other some amazing people and for the cameras. That’s when got to experience things that I tell him, ‘Just say “no.”’ It’s I never would have dreamed not your event, it’s not what of,” Kenworthy says. you should be doing, and it Even if he never dreamed scares the hell out of me.” of going to the Olympics, Gus doesn’t seem so worthat’s where he’s headed. ried about it. “I’ve been feaGus took the world by storm tured in magazines, filmed with his first big win at the video parts, landed never2010 Aspen Open in both before-done tricks, stood the slopestyle and halfpipe atop the podium at major events. Throughout that seaevents, and I’ve had a truly son and the next, he was a awesome time every step of regular on the podium. In the way,” he says with a wide April 2011, he was crowned grin. And he’s not planning the 2010/2011 Overall World on slowing down. “I definiteChampion by the Associaly want to compete as much tion of Freeskiing Profesas I can, win an X Games sionals, an organization medal and compete in the dedicated to the globaliza2014 Winter Olympics.” tion of the so-called “new Gus isn’t the only rising [ Gus Kenworthy makes it look easy at the 2011 X Games in Aspen. ] school” of freestyle skiing: star who skirted child-labor halfpipe, slopestyle, big air laws as a hardworking young and terrain-park events. That June he was named to the athlete in Telluride. “There wasn’t a lot of sleeping in, let’s just brand-new U.S. Freeskiing Team, which will field athletes say that,” laughs Jimmy Discoe. Between training on the weekin Sochi, Russia, as the first-ever halfpipe and slopestyle days, competing on the weekends and keeping up with schoolskiing events debut at the 2014 Olympics. Then, to cap off work at night, by the time Sunday morning rolled around he the 2011 summer season, Gus was in the spotlight again was physically exhausted. “We were on the road with the ski with two more back-to-back wins, this time in the New team every weekend,” he explains, “so instead of doing the Zealand Winter Games slopestyle and halfpipe comps; he usual high-school stuff like football games or school dances or also won the “One Hit Wonder” event, a high-profile, singoing to the skate park with our buddies, we were traveling all gle-jump contest in Australia with a $10,000 prize. over Colorado and Utah. But it was fun. Every week, you came back to school and there was a whole new story to tell.” photo by steven kornreich