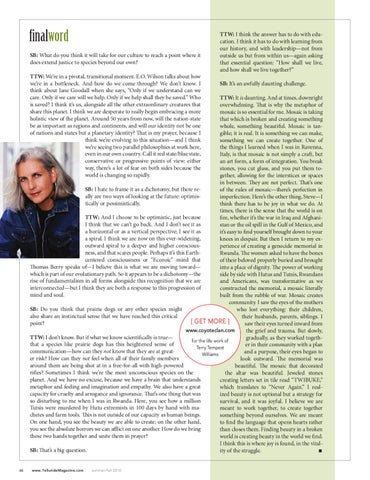 finalword SB: What do you think it will take for our culture to reach a point where it does extend justice to species beyond our own? TTW: We’re in a pivotal, transitional moment. E.O. Wilson talks about how we’re in a bottleneck. And how do we come through? We don’t know. I think about Jane Goodall when she says, “Only if we understand can we care. Only if we care will we help. Only if we help shall they be saved.” Who is saved? I think it’s us, alongside all the other extraordinary creatures that share this planet. I think we are desperate to really begin embracing a more holistic view of the planet. Around 50 years from now, will the nation-state be as important as regions and continents, and will our identity not be one of nations and states but a planetary identity? That is my prayer, because I think we’re evolving to this situation—and I think we’re seeing two parallel philosophies at work here, even in our own country. Call it red state/blue state, conservative or progressive points of view: either way, there’s a lot of fear on both sides because the world is changing so rapidly.

TTW: I think the answer has to do with education. I think it has to do with learning from our history, and with leadership—not from outside us but from within us—again asking that essential question: “How shall we live, and how shall we live together?” SB: It’s an awfully daunting challenge.

TTW: It is daunting. And at times, downright overwhelming. That is why the metaphor of mosaic is so essential for me. Mosaic is taking that which is broken and creating something whole, something beautiful. Mosaic is tangible; it is real. It is something we can make, something we can create together. One of the things I learned when I was in Ravenna, Italy, is that mosaic is not simply a craft, but an art form, a form of integration. You break stones, you cut glass, and you put them together, allowing for the interstices or spaces in between. They are not perfect. That’s one SB: I hate to frame it as a dichotomy, but there reof the rules of mosaic—there’s perfection in ally are two ways of looking at the future: optimisimperfection. Here’s the other thing, Steve—I tically or pessimistically. think there has to be joy in what we do. At times, there is the sense that the world is on TTW: And I choose to be optimistic, just because fire, whether it’s the war in Iraq and AfghaniI think that we can’t go back. And I don’t see it as stan or the oil spill in the Gulf of Mexico, and a horizontal or as a vertical perspective; I see it as it’s easy to find yourself brought down to your a spiral. I think we are now on this ever-widening, knees in despair. But then I return to my exoutward spiral to a deeper and higher consciousperience of creating a genocide memorial in ness, and that scares people. Perhaps it’s this EarthRwanda. The women asked to have the bones centered consciousness or “Ecozoic” mind that of their beloved properly buried and brought Thomas Berry speaks of—I believe this is what we are moving toward— into a place of dignity. The power of working which is part of our evolutionary path. So it appears to be a dichotomy—the side by side with Hutus and Tutsis, Rwandans rise of fundamentalism in all forms alongside this recognition that we are and Americans, was transformative as we interconnected—but I think they are both a response to this progression of constructed the memorial, a mosaic literally mind and soul. built from the rubble of war. Mosaic creates community. I saw the eyes of the mothers SB: Do you think that prairie dogs or any other species might who lost everything: their children, also share an instinctual sense that we have reached this critical their husbands, parents, siblings. I [ GET MORE ] point? saw their eyes turned inward from www.coyoteclan.com the grief and trauma. But slowly, TTW: I don’t know. But if what we know scientifically is true— gradually, as they worked togethfor the life work of that a species like prairie dogs has this heightened sense of er in their community with a plan Terry Tempest communication—how can they not know that they are at greatand a purpose, their eyes began to Williams er risk? How can they not feel when all of their family members look outward. The memorial was around them are being shot at in a free-for-all with high-powered beautiful. The mosaic that decorated rifles? Sometimes I think we’re the most unconscious species on the the altar was beautiful. Jeweled stones planet. And we have no excuse, because we have a brain that understands creating letters set in tile read “TWIBUKE,” metaphor and feeling and imagination and empathy. We also have a great which translates to “Never Again.” I realcapacity for cruelty and arrogance and ignorance. That’s one thing that was ized beauty is not optional but a strategy for so disturbing to me when I was in Rwanda. Here, you see how a million survival, and it was joyful. I believe we are Tutsis were murdered by Hutu extremists in 100 days by hand with mameant to work together, to create together chetes and farm tools. This is not outside of our capacity as human beings. something beyond ourselves. We are meant On one hand, you see the beauty we are able to create; on the other hand, to find the language that opens hearts rather you see the absolute horrors we can afflict on one another. How do we bring than closes them. Finding beauty in a broken these two hands together and unite them in prayer? world is creating beauty in the world we find. I think this is where joy is found, in the vitalg SB: That’s a big question. ity of the struggle.