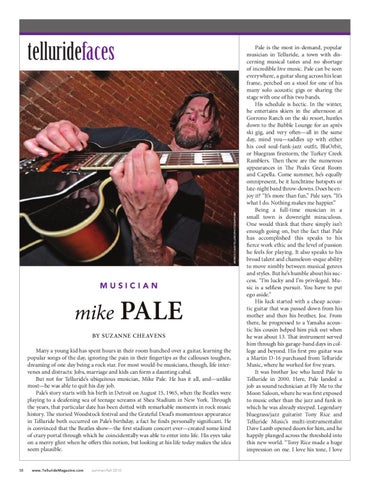 mike Pale By Suzanne Cheavens Many a young kid has spent hours in their room hunched over a guitar, learning the popular songs of the day, ignoring the pain in their fingertips as the callouses toughen, dreaming of one day being a rock star. For most would-be musicians, though, life intervenes and distracts: Jobs, marriage and kids can form a daunting cabal. But not for Telluride’s ubiquitous musician, Mike Pale. He has it all, and—unlike most—he was able to quit his day job. Pale’s story starts with his birth in Detroit on August 15, 1965, when the Beatles were playing to a deafening sea of teenage screams at Shea Stadium in New York. Through the years, that particular date has been dotted with remarkable moments in rock music history. The storied Woodstock festival and the Grateful Dead’s momentous appearance in Telluride both occurred on Pale’s birthday, a fact he finds personally significant. He is convinced that the Beatles show—the first stadium concert ever—created some kind of crazy portal through which he coincidentally was able to enter into life. His eyes take on a merry glint when he offers this notion, but looking at his life today makes the idea seem plausible.

Pale is the most in-demand, popular musician in Telluride, a town with discerning musical tastes and no shortage of incredible live music. Pale can be seen everywhere, a guitar slung across his lean frame, perched on a stool for one of his many solo acoustic gigs or sharing the stage with one of his two bands. His schedule is hectic. In the winter, he entertains skiers in the afternoon at Gorrono Ranch on the ski resort, hustles down to the Bubble Lounge for an après ski gig, and very often—all in the same day, mind you—saddles up with either his cool soul-funk-jazz outfit, BluOrbit, or bluegrass firestorm, the Turkey Creek Ramblers. Then there are the numerous appearances in The Peaks Great Room and Capella. Come summer, he’s equally omnipresent, be it lunchtime hotspots or late-night band throw-downs. Does he enjoy it? “It’s more than fun,” Pale says. “It’s what I do. Nothing makes me happier.” Being a full-time musician in a small town is downright miraculous. One would think that there simply isn’t enough going on, but the fact that Pale has accomplished this speaks to his fierce work ethic and the level of passion he feels for playing. It also speaks to his broad talent and chameleon-esque ability to move nimbly between musical genres and styles. But he’s humble about his success. “I’m lucky and I’m privileged. Music is a selfless pursuit. You have to put ego aside.” His luck started with a cheap acoustic guitar that was passed down from his mother and then his brother, Joe. From there, he progressed to a Yamaha acoustic his cousin helped him pick out when he was about 13. That instrument served him through his garage-band days in college and beyond. His first pro guitar was a Martin D-16 purchased from Telluride Music, where he worked for five years. It was brother Joe who lured Pale to Telluride in 2000. Here, Pale landed a job as sound technician at Fly Me to the Moon Saloon, where he was first exposed to music other than the jazz and funk in which he was already steeped. Legendary bluegrass/jazz guitarist Tony Rice and Telluride Music’s multi-instrumentalist Dave Lamb opened doors for him, and he happily plunged across the threshold into this new world. “Tony Rice made a huge impression on me. I love his tone, I love