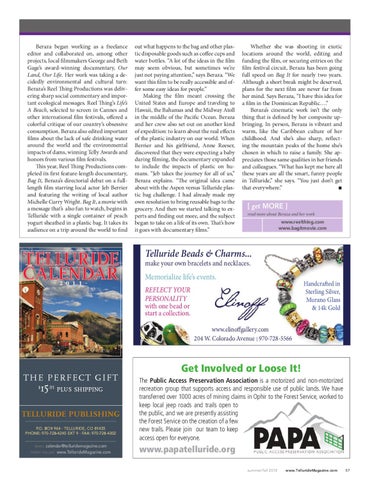 Beraza began working as a freelance editor and collaborated on, among other projects, local filmmakers George and Beth Gage’s award-winning documentary, Our Land, Our Life. Her work was taking a decidedly environmental and cultural turn: Beraza’s Reel Thing Productions was delivering sharp social commentary and important ecological messages. Reel Thing’s Life’s A Beach, selected to screen in Cannes and other international film festivals, offered a colorful critique of our country’s obsessive consumption. Beraza also edited important films about the lack of safe drinking water around the world and the environmental impacts of dams, winning Telly Awards and honors from various film festivals. This year, Reel Thing Productions completed its first feature-length documentary, Bag It, Beraza’s directorial debut on a fulllength film starring local actor Jeb Berrier and featuring the writing of local author Michelle Curry Wright. Bag It, a movie with a message that’s also fun to watch, begins in Telluride with a single container of peach yogurt sheathed in a plastic bag. It takes its audience on a trip around the world to find

out what happens to the bag and other plastic disposable goods such as coffee cups and water bottles. “A lot of the ideas in the film may seem obvious, but sometimes we’re just not paying attention,” says Beraza. “We want this film to be really accessible and offer some easy ideas for people.” Making the film meant crossing the United States and Europe and traveling to Hawaii, the Bahamas and the Midway Atoll in the middle of the Pacific Ocean. Beraza and her crew also set out on another kind of expedition: to learn about the real effects of the plastic industry on our world. When Berrier and his girlfriend, Anne Reeser, discovered that they were expecting a baby during filming, the documentary expanded to include the impacts of plastic on humans. “Jeb takes the journey for all of us,” Beraza explains. “The original idea came about with the Aspen versus Telluride plastic bag challenge. I had already made my own resolution to bring reusable bags to the grocery. And then we started talking to experts and finding out more, and the subject began to take on a life of its own. That’s how it goes with documentary films.”

Whether she was shooting in exotic locations around the world, editing and funding the film, or securing entries on the film festival circuit, Beraza has been going full speed on Bag It for nearly two years. Although a short break might be deserved, plans for the next film are never far from her mind. Says Beraza, “I have this idea for a film in the Dominican Republic….” Beraza’s cinematic work isn’t the only thing that is defined by her composite upbringing. In person, Beraza is vibrant and warm, like the Caribbean culture of her childhood. And she’s also sharp, reflecting the mountain peaks of the home she’s chosen in which to raise a family. She appreciates those same qualities in her friends and colleagues. “What has kept me here all these years are all the smart, funny people in Telluride,” she says. “You just don’t get g that everywhere.”

[ get more ] read more about Beraza and her work

Get Involved or Loose It! The Public Access Preservation Association is a motorized and non-motorized recreation group that supports access and responsible use of public lands. We have transferred over 1000 acres of mining claims in Ophir to the Forest Service, worked to keep local jeep roads and trails open to the public, and we are presently assisting the Forest Service on the creation of a few new trails. Please join our team to keep access open for everyone.