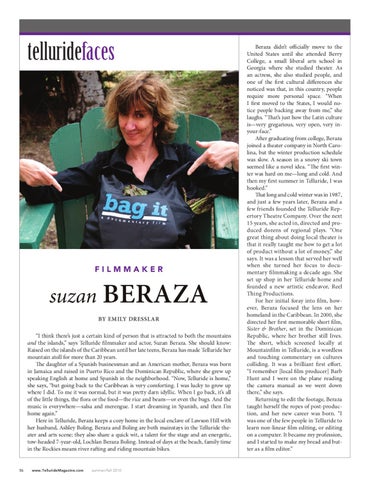 suzan BERAZA By emily dresslar “I think there’s just a certain kind of person that is attracted to both the mountains and the islands,” says Telluride filmmaker and actor, Suzan Beraza. She should know: Raised on the islands of the Caribbean until her late teens, Beraza has made Telluride her mountain atoll for more than 20 years. The daughter of a Spanish businessman and an American mother, Beraza was born in Jamaica and raised in Puerto Rico and the Dominican Republic, where she grew up speaking English at home and Spanish in the neighborhood. “Now, Telluride is home,” she says, “but going back to the Caribbean is very comforting. I was lucky to grow up where I did. To me it was normal, but it was pretty darn idyllic. When I go back, it’s all of the little things, the flora or the food—the rice and beans—or even the bugs. And the music is everywhere—salsa and merengue. I start dreaming in Spanish, and then I’m home again.” Here in Telluride, Beraza keeps a cozy home in the local enclave of Lawson Hill with her husband, Ashley Boling. Beraza and Boling are both mainstays in the Telluride theater and arts scene; they also share a quick wit, a talent for the stage and an energetic, tow-headed 7-year-old, Lochlan Beraza Boling. Instead of days at the beach, family time in the Rockies means river rafting and riding mountain bikes.

Beraza didn’t officially move to the United States until she attended Berry College, a small liberal arts school in Georgia where she studied theater. As an actress, she also studied people, and one of the first cultural differences she noticed was that, in this country, people require more personal space. “When I first moved to the States, I would notice people backing away from me,” she laughs. “That’s just how the Latin culture is—very gregarious, very open, very inyour-face.” After graduating from college, Beraza joined a theater company in North Carolina, but the winter production schedule was slow. A season in a snowy ski town seemed like a novel idea. “The first winter was hard on me—long and cold. And then my first summer in Telluride, I was hooked.” That long and cold winter was in 1987, and just a few years later, Beraza and a few friends founded the Telluride Repertory Theatre Company. Over the next 15 years, she acted in, directed and produced dozens of regional plays. “One great thing about doing local theater is that it really taught me how to get a lot of product without a lot of money,” she says. It was a lesson that served her well when she turned her focus to documentary filmmaking a decade ago. She set up shop in her Telluride home and founded a new artistic endeavor, Reel Thing Productions. For her initial foray into film, however, Beraza focused the lens on her homeland in the Caribbean. In 2000, she directed her first memorable short film, Sister & Brother, set in the Dominican Republic, where her brother still lives. The short, which screened locally at Mountainfilm in Telluride, is a wordless and touching commentary on cultures colliding. It was a brilliant first effort. “I remember [local film producer] Barb Hunt and I were on the plane reading the camera manual as we went down there,” she says. Returning to edit the footage, Beraza taught herself the ropes of post-production, and her new career was born. “I was one of the few people in Telluride to learn non-linear film editing, or editing on a computer. It became my profession, and I started to make my bread and butter as a film editor.”