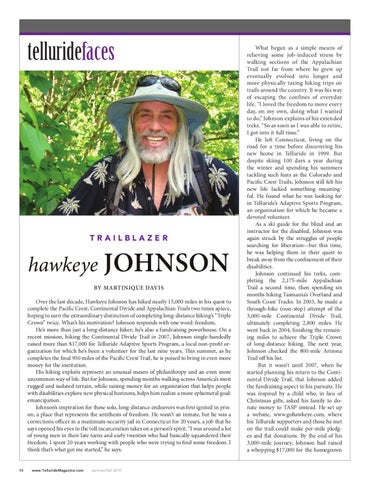 hawkeye johnson By Martinique Davis Over the last decade, Hawkeye Johnson has hiked nearly 15,000 miles in his quest to complete the Pacific Crest, Continental Divide and Appalachian Trails two times apiece, hoping to earn the extraordinary distinction of completing long-distance hiking’s “Triple Crown” twice. What’s his motivation? Johnson responds with one word: freedom. He’s more than just a long-distance hiker; he’s also a fundraising powerhouse. On a recent mission, hiking the Continental Divide Trail in 2007, Johnson single-handedly raised more than $17,000 for Telluride Adaptive Sports Program, a local non-profit organization for which he’s been a volunteer for the last nine years. This summer, as he completes the final 950 miles of the Pacific Crest Trail, he is poised to bring in even more money for the institution. His hiking exploits represent an unusual means of philanthropy and an even more uncommon way of life. But for Johnson, spending months walking across America’s most rugged and isolated terrain, while raising money for an organization that helps people with disabilities explore new physical horizons, helps him realize a more ephemeral goal: emancipation. Johnson’s inspiration for these solo, long-distance endeavors was first ignited in prison, a place that represents the antithesis of freedom. He wasn’t an inmate, but he was a corrections officer in a maximum-security jail in Connecticut for 20 years, a job that he says opened his eyes to the toll incarceration takes on a person’s spirit. “I was around a lot of young men in their late teens and early twenties who had basically squandered their freedom. I spent 20 years working with people who were trying to find some freedom. I think that’s what got me started,” he says.

What began as a simple means of relieving some job-induced stress by walking sections of the Appalachian Trail not far from where he grew up eventually evolved into longer and more physically taxing hiking trips on trails around the country. It was his way of escaping the confines of everyday life. “I loved the freedom to move every day, on my own, doing what I wanted to do,” Johnson explains of his extended treks. “So as soon as I was able to retire, I got into it full time.” He left Connecticut, living on the road for a time before discovering his new home in Telluride in 1999. But despite skiing 100 days a year during the winter and spending his summers tackling such feats as the Colorado and Pacific Crest Trails, Johnson still felt his new life lacked something meaningful. He found what he was looking for in Telluride’s Adaptive Sports Program, an organization for which he became a devoted volunteer. As a ski guide for the blind and an instructor for the disabled, Johnson was again struck by the struggles of people searching for liberation—but this time, he was helping them in their quest to break away from the confinement of their disabilities. Johnson continued his treks, completing the 2,175-mile Appalachian Trail a second time, then spending six months hiking Tasmania’s Overland and South Coast Tracks. In 2003, he made a through-hike (non-stop) attempt of the 3,000-mile Continental Divide Trail, ultimately completing 2,800 miles. He went back in 2004, finishing the remaining miles to achieve the Triple Crown of long-distance hiking. The next year, Johnson checked the 800-mile Arizona Trail off his list. But it wasn’t until 2007, when he started planning his return to the Continental Divide Trail, that Johnson added the fundraising aspect to his pursuits. He was inspired by a child who, in lieu of Christmas gifts, asked his family to donate money to TASP instead. He set up a website, www.gohawkeye.com, where his Telluride supporters and those he met on the trail could make per-mile pledges and flat donations. By the end of his 3,000-mile journey, Johnson had raised a whopping $17,000 for the homegrown