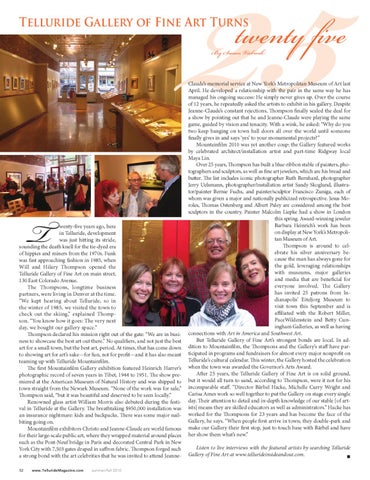 wenty-five years ago, here in Telluride, development was just hitting its stride, sounding the death knell for the tie-dyed era of hippies and miners from the 1970s. Funk was fast approaching fashion in 1985, when Will and Hilary Thompson opened the Telluride Gallery of Fine Art on main street, 130 East Colorado Avenue. The Thompsons, longtime business partners, were living in Denver at the time. “We kept hearing about Telluride, so in the winter of 1985, we visited the town to check out the skiing,” explained Thompson. “You know how it goes: The very next day, we bought our gallery space.” Thompson declared his mission right out of the gate: “We are in business to showcase the best art out there.” No qualifiers, and not just the best art for a small town, but the best art, period. At times, that has come down to showing art for art’s sake—for fun, not for profit—and it has also meant teaming up with Telluride Mountainfilm. The first Mountainfilm Gallery exhibition featured Heinrich Harrer’s photographic record of seven years in Tibet, 1944 to 1951. The show premiered at the American Museum of Natural History and was shipped to town straight from the Newark Museum. “None of the work was for sale,” Thompson said, “but it was beautiful and deserved to be seen locally.” Renowned glass artist William Morris also debuted during the festival in Telluride at the Gallery. The breathtaking $950,000 installation was an insurance nightmare: kids and backpacks. There was some major nailbiting going on. Mountainfilm exhibitors Christo and Jeanne-Claude are world famous for their large-scale public art, where they wrapped material around places such as the Pont-Neuf bridge in Paris and decorated Central Park in New York City with 7,503 gates draped in saffron fabric. Thompson forged such a strong bond with the art celebrities that he was invited to attend Jeanne52

Claude’s memorial service at New York’s Metropolitan Museum of Art last April. He developed a relationship with the pair in the same way he has managed his ongoing success: He simply never gives up. Over the course of 12 years, he repeatedly asked the artists to exhibit in his gallery. Despite Jeanne-Claude’s constant rejections, Thompson finally sealed the deal for a show by pointing out that he and Jeanne-Claude were playing the same game, guided by vision and tenacity. With a wink, he asked: “Why do you two keep banging on town hall doors all over the world until someone finally gives in and says ‘yes’ to your monumental projects?” Mountainfilm 2010 was yet another coup: the Gallery featured works by celebrated architect/installation artist and part-time Ridgway local Maya Lin. Over 25 years, Thompson has built a blue-ribbon stable of painters, photographers and sculptors, as well as fine art jewelers, which are his bread and butter. The list includes iconic photographer Ruth Bernhard, photographer Jerry Uelsmann, photographer/installation artist Sandy Skoglund, illustrator/painter Bernie Fuchs, and painter/sculptor Francisco Zuniga, each of whom was given a major and nationally publicized retrospective. Jesus Moroles, Thomas Ostenberg and Albert Paley are considered among the best sculptors in the country. Painter Malcolm Liepke had a show in London this spring. Award-winning jeweler Barbara Heinrich’s work has been on display at New York’s Metropolitan Museum of Art. Thompson is around to celebrate his silver anniversary because the man has always gone for the gold, leveraging relationships with museums, major galleries and media that are beneficial for everyone involved. The Gallery has invited 25 patrons from Indianapolis’ Eiteljorg Museum to visit town this September and is affiliated with the Robert Miller, PaceWildenstein and Betty Cuningham Galleries, as well as having connections with Art in America and Southwest Art. But Telluride Gallery of Fine Art’s strongest bonds are local. In addition to Mountainfilm, the Thompsons and the Gallery’s staff have participated in programs and fundraisers for almost every major nonprofit on Telluride’s cultural calendar. This winter, the Gallery hosted the celebration when the town was awarded the Governor’s Arts Award. After 25 years, the Telluride Gallery of Fine Art is on solid ground, but it would all turn to sand, according to Thompson, were it not for his incomparable staff. “Director Bärbel Hacke, Michelle Curry Wright and Carisa Ames work so well together to put the Gallery on stage every single day. Their attention to detail and in-depth knowledge of our stable [of artists] means they are skilled educators as well as administrators.” Hacke has worked for the Thompsons for 23 years and has become the face of the Gallery, he says. “When people first arrive in town, they double-park and make our Gallery their first stop, just to touch base with Bärbel and have her show them what’s new.” Listen to live interviews with the featured artists by searching Telluride Gallery of Fine Art at www.tellurideinsideandout.com. g