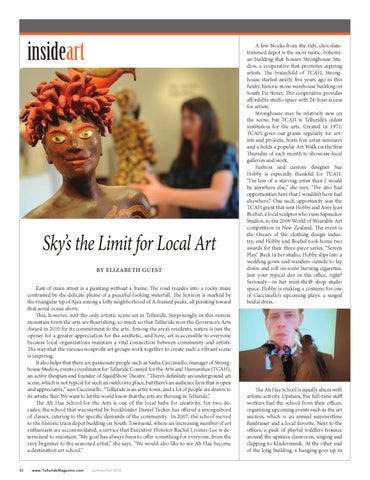 Sky’s the Limit for Local Art By Elizabeth Guest East of main street is a painting without a frame: The road recedes into a rocky maze contrasted by the delicate plume of a peaceful-looking waterfall. The horizon is marked by the triangular tip of Ajax among a lofty neighborhood of A-framed peaks, all pointing toward that aerial ocean above. This, however, isn’t the only artistic scene set in Telluride. Surprisingly, in this remote mountain town the arts are flourishing, so much so that Telluride won the Governor’s Arts Award in 2010 for its commitment to the arts. Among the area’s residents, nature is just the opener for a greater appreciation for the aesthetic, and here, art is accessible to everyone because local organizations maintain a vital connection between community and artists. The way that the various nonprofit art groups work together to create such a vibrant scene is inspiring. It also helps that there are passionate people such as Sasha Cucciniello, manager of Stronghouse Studios, events coordinator for Telluride Council for the Arts and Humanities (TCAH), an active thespian and founder of SquidShow Theatre. “There’s definitely an underground art scene, which is not typical for such an outdoorsy place, but there’s an audience here that is open and appreciative,” says Cucciniello. “Telluride is an artsy town, and a lot of people are drawn to its artistic flair. We want to let the world know that the arts are thriving in Telluride.” The Ah Haa School for the Arts is one of the local hubs for creativity. For two decades, the school that was started by bookbinder Daniel Tucker has offered a smorgasbord of classes, catering to the specific demands of the community. In 2007, the school moved to the historic train depot building on South Townsend, where an increasing number of art enthusiasts are accommodated, a service that Executive Director Rachel Loomis-Lee is determined to maintain. “My goal has always been to offer something for everyone, from the very beginner to the seasoned artist,” she says. “We would also like to see Ah Haa become a destination art school.”

A few blocks from the tidy, chocolatetrimmed depot is the more rustic, bohemian building that houses Stronghouse Studios, a cooperative that promotes aspiring artists. The brainchild of TCAH, Stronghouse started nearly five years ago in this funky, historic stone warehouse building on South Fir Street. The cooperative provides affordable studio space with 24-hour access for artists. Stronghouse may be relatively new on the scene, but TCAH is Telluride’s oldest institution for the arts. Created in 1971, TCAH gives out grants regularly for artists and projects, hosts free artist seminars and a holds a popular Art Walk on the first Thursday of each month to showcase local galleries and work. Fashion and custom designer Sue Hobby is especially thankful for TCAH. “I’m less of a starving artist than I would be anywhere else,” she says. “I’ve also had opportunities here that I wouldn’t have had elsewhere.” One such opportunity was the TCAH grant that sent Hobby and Amy Jean Boebel, a local sculptor who runs Sapsucker Studios, to the 2009 World of Wearable Art competition in New Zealand. The event is the Oscars of the clothing design industry, and Hobby and Boebel took home two awards for their three-piece series, “Screen Play.” Back in her studio, Hobby slips into a wedding gown and wanders outside to lay down and roll on some burning cigarettes. Just your typical day in the office, right? Seriously—in her mini-thrift shop studio space, Hobby is making a costume for one of Cucciniello’s upcoming plays: a singed bridal dress.

The Ah Haa School is equally abuzz with artistic activity. Upstairs, five full-time staff workers fuel the school from their offices, organizing upcoming events such as the art auction, which is an annual summertime fundraiser and a local favorite. Next to the offices, a pack of playful toddlers trounce around the upstairs classroom, singing and clapping to Kindermusik. At the other end of the long building, a hanging goes up in