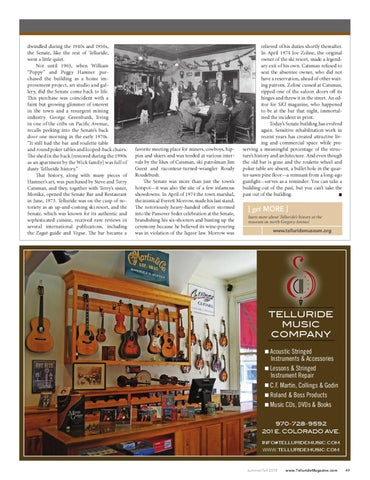 relieved of his duties shortly thereafter. In April 1974 Joe Zoline, the original owner of the ski resort, made a legendary exit of his own. Catsman refused to seat the absentee owner, who did not have a reservation, ahead of other waiting patrons. Zoline cussed at Catsman, ripped one of the saloon doors off its hinges and threw it in the street. An editor for Ski magazine, who happened to be at the bar that night, immortalized the incident in print. Today’s Senate building has evolved again. Sensitive rehabilitation work in recent years has created attractive living and commercial space while preserving a meaningful percentage of the structure’s history and architecture. And even though the old bar is gone and the roulette wheel and poker table are absent, a bullet hole in the quarter-sawn pine floor—a remnant from a long-ago gunfight—serves as a reminder: You can take a building out of the past, but you can’t take the g past out of the building. telluride historical museum

dwindled during the 1940s and 1950s, the Senate, like the rest of Telluride, went a little quiet. Not until 1965, when William “Poppy” and Peggy Hamner purchased the building as a home improvement project, art studio and gallery, did the Senate come back to life. This purchase was coincident with a faint but growing glimmer of interest in the town and a resurgent mining industry. George Greenbank, living in one of the cribs on Pacific Avenue, recalls peeking into the Senate’s back door one morning in the early 1970s. “It still had the bar and roulette table and round poker tables and looped-back chairs. The shed in the back [restored during the 1990s as an apartment by the Wick family] was full of dusty Telluride history.” That history, along with many pieces of Hamner’s art, was purchased by Steve and Terry Catsman, and they, together with Terry’s sister, Monika, opened the Senate Bar and Restaurant in June, 1973. Telluride was on the cusp of notoriety as an up-and-coming ski resort, and the Senate, which was known for its authentic and sophisticated cuisine, received rave reviews in several international publications, including the Zagat guide and Vogue. The bar became a

favorite meeting place for miners, cowboys, hippies and skiers and was tended at various intervals by the likes of Catsman, ski patrolman Jim Guest and raconteur-turned-wrangler Roudy Roudebush. The Senate was more than just the town’s hotspot—it was also the site of a few infamous showdowns. In April of 1974 the town marshal, the inimical Everett Morrow, made his last stand. The notoriously heavy-handed officer stormed into the Passover Seder celebration at the Senate, brandishing his six-shooters and busting up the ceremony because he believed its wine-pouring was in violation of the liquor law. Morrow was