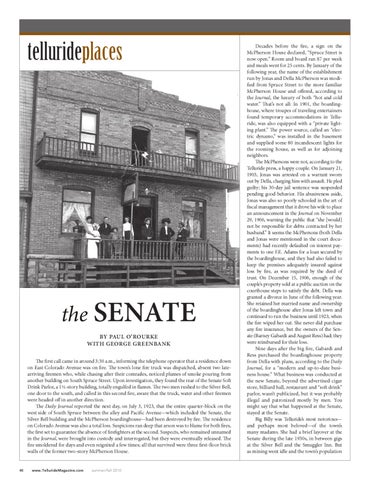 the Senate By Paul O’Rourke with George Greenbank The first call came in around 3:30 a.m., informing the telephone operator that a residence down on East Colorado Avenue was on fire. The town’s lone fire truck was dispatched, absent two latearriving firemen who, while chasing after their comrades, noticed plumes of smoke pouring from another building on South Spruce Street. Upon investigation, they found the rear of the Senate Soft Drink Parlor, a 1½-story building, totally engulfed in flames. The two men rushed to the Silver Bell, one door to the south, and called in this second fire, aware that the truck, water and other firemen were headed off in another direction. The Daily Journal reported the next day, on July 3, 1923, that the entire quarter-block on the west side of South Spruce between the alley and Pacific Avenue—which included the Senate, the Silver Bell building and the McPherson boardinghouse—had been destroyed by fire. The residence on Colorado Avenue was also a total loss. Suspicions ran deep that arson was to blame for both fires, the first set to guarantee the absence of firefighters at the second. Suspects, who remained unnamed in the Journal, were brought into custody and interrogated, but they were eventually released. The fire smoldered for days and even reignited a few times; all that survived were three first-floor brick walls of the former two-story McPherson House.

Decades before the fire, a sign on the McPherson House declared, “Spruce Street is now open.” Room and board ran $7 per week and meals went for 25 cents. By January of the following year, the name of the establishment run by Jonas and Della McPherson was modified from Spruce Street to the more familiar McPherson House and offered, according to the Journal, the luxury of both “hot and cold water.” That’s not all: In 1901, the boardinghouse, where troupes of traveling entertainers found temporary accommodations in Telluride, was also equipped with a “private lighting plant.” The power source, called an “electric dynamo,” was installed in the basement and supplied some 80 incandescent lights for the rooming house, as well as for adjoining neighbors. The McPhersons were not, according to the Telluride press, a happy couple. On January 21, 1903, Jonas was arrested on a warrant sworn out by Della, charging him with assault. He pled guilty; his 30-day jail sentence was suspended pending good behavior. His abusiveness aside, Jonas was also so poorly schooled in the art of fiscal management that it drove his wife to place an announcement in the Journal on November 29, 1906, warning the public that “she [would] not be responsible for debts contracted by her husband.” It seems the McPhersons (both Della and Jonas were mentioned in the court documents) had recently defaulted on interest payments to one F.E. Adams for a loan secured by the boardinghouse, and they had also failed to keep the premises adequately insured against loss by fire, as was required by the deed of trust. On December 15, 1906, enough of the couple’s property sold at a public auction on the courthouse steps to satisfy the debt. Della was granted a divorce in June of the following year. She retained her married name and ownership of the boardinghouse after Jonas left town and continued to run the business until 1923, when the fire wiped her out. She never did purchase any fire insurance, but the owners of the Senate (Barney Gabardi and August Ress) had; they were reimbursed for their loss. Nine days after the big fire, Gabardi and Ress purchased the boardinghouse property from Della with plans, according to the Daily Journal, for a “modern and up-to-date business house.” What business was conducted at the new Senate, beyond the advertised cigar store, billiard hall, restaurant and “soft drink” parlor, wasn’t publicized, but it was probably illegal and patronized mostly by men. You might say that what happened at the Senate, stayed at the Senate. Big Billy was Telluride’s most notorious— and perhaps most beloved—of the town’s many madams. She had a brief layover at the Senate during the late 1930s, in between gigs at the Silver Bell and the Smuggler Inn. But as mining went idle and the town’s population