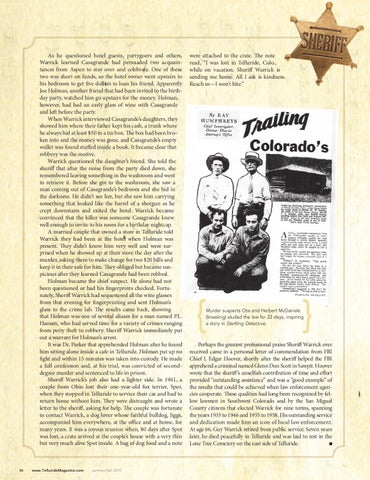 As he questioned hotel guests, partygoers and others, Warrick learned Casagrande had persuaded two acquaintances from Aspen to stay over and celebrate. One of these two was short on funds, so the hotel owner went upstairs to his bedroom to get five dollars to loan his friend. Apparently Joe Holman, another friend that had been invited to the birthday party, watched him go upstairs for the money. Holman, however, had had an early glass of wine with Casagrande and left before the party. When Warrick interviewed Casagrande’s daughters, they showed him where their father kept his cash, a trunk where he always hid at least $50 in a tin box. The box had been broken into and the money was gone, and Casagrande’s empty wallet was found stuffed inside a book. It became clear that robbery was the motive. Warrick questioned the daughter’s friend. She told the sheriff that after the noise from the party died down, she remembered leaving something in the washroom and went to retrieve it. Before she got to the washroom, she saw a man coming out of Casagrande’s bedroom and she hid in the darkness. He didn’t see her, but she saw him carrying something that looked like the barrel of a shotgun as he crept downstairs and exited the hotel. Warrick became convinced that the killer was someone Casagrande knew well enough to invite to his room for a birthday nightcap. A married couple that owned a store in Telluride told Warrick they had been at the hotel when Holman was present. They didn’t know him very well and were surprised when he showed up at their store the day after the murder, asking them to make change for two $20 bills and keep it in their safe for him. They obliged but became suspicious after they learned Casagrande had been robbed. Holman became the chief suspect. He alone had not been questioned or had his fingerprints checked. Fortunately, Sheriff Warrick had sequestered all the wine glasses from that evening for fingerprinting and sent Holman’s glass to the crime lab. The results came back, showing that Holman was one of several aliases for a man named P.L. Hansen, who had served time for a variety of crimes ranging from petty theft to robbery. Sheriff Warrick immediately put out a warrant for Holman’s arrest. It was Dr. Parker that apprehended Holman after he found him sitting alone inside a cafe in Telluride. Holman put up no fight and within 15 minutes was taken into custody. He made a full confession and, at his trial, was convicted of seconddegree murder and sentenced to life in prison. Sheriff Warrick’s job also had a lighter side. In 1941, a couple from Ohio lost their one-year-old fox terrier, Spot, when they stopped in Telluride to service their car and had to return home without him. They were distraught and wrote a letter to the sheriff, asking for help. The couple was fortunate to contact Warrick, a dog lover whose faithful bulldog, Jiggs, accompanied him everywhere, at the office and at home, for many years. It was a joyous reunion when, 80 days after Spot was lost, a crate arrived at the couple’s house with a very thin but very much alive Spot inside. A bag of dog food and a note

were attached to the crate. The note read, “I was lost in Telluride, Colo., while on vacation. Sheriff Warrick is sending me home. All I ask is kindness. Reach in—I won’t bite.”

Perhaps the greatest professional praise Sheriff Warrick ever received came in a personal letter of commendation from FBI Chief J. Edgar Hoover, shortly after the sheriff helped the FBI apprehend a criminal named Glenn Don Scott in Sawpit. Hoover wrote that the sheriff ’s unselfish contribution of time and effort provided “outstanding assistance” and was a “good example” of the results that could be achieved when law enforcement agencies cooperate. These qualities had long been recognized by fellow lawmen in Southwest Colorado and by the San Miguel County citizens that elected Warrick for nine terms, spanning the years 1933 to 1946 and 1955 to 1958. His outstanding service and dedication made him an icon of local law enforcement. At age 66, Guy Warrick retired from public service. Seven years later, he died peacefully in Telluride and was laid to rest in the g Lone Tree Cemetery on the east side of Telluride.