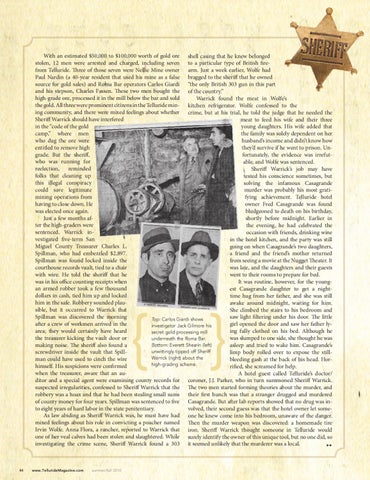 With an estimated $50,000 to $100,000 worth of gold ore shell casing that he knew belonged stolen, 12 men were arrested and charged, including seven to a particular type of British firefrom Telluride. Three of those seven were Nellie Mine owner arm. Just a week earlier, Wolfe had Paul Nardin (a 40-year resident that used his mine as a false bragged to the sheriff that he owned source for gold sales) and Roma Bar operators Carlos Giardi “the only British 303 gun in this part and his stepson, Charles Fassen. These two men bought the of the country.” high-grade ore, processed it in the mill below the bar and sold Warrick found the meat in Wolfe’s the gold. All three were prominent citizens in the Telluride min- kitchen refrigerator. Wolfe confessed to the ing community, and there were mixed feelings about whether crime, but at his trial, he told the judge that he needed the Sheriff Warrick should have interfered meat to feed his wife and their three in the “code of the gold young daughters. His wife added that camp,” where men the family was solely dependent on her who dug the ore were husband’s income and didn’t know how entitled to remove high they’d survive if he went to prison. Ungrade. But the sheriff, fortunately, the evidence was irrefutwho was running for able, and Wolfe was sentenced. reelection, reminded Sheriff Warrick’s job may have folks that cleaning up tested his conscience sometimes, but this illegal conspiracy solving the infamous Casagrande could save legitimate murder was probably his most gratimining operations from fying achievement. Telluride hotel having to close down. He owner Fred Casagrande was found was elected once again. bludgeoned to death on his birthday, Just a few months afshortly before midnight. Earlier in ter the high-graders were the evening, he had celebrated the sentenced, Warrick inoccasion with friends, drinking wine vestigated five-term San in the hotel kitchen, and the party was still Miguel County Treasurer Charles L. going on when Casagrande’s two daughters, Spillman, who had embezzled $2,897. a friend and the friend’s mother returned Spillman was found locked inside the from seeing a movie at the Nugget Theater. It courthouse records vault, tied to a chair was late, and the daughters and their guests with wire. He told the sheriff that he went to their rooms to prepare for bed. was in his office counting receipts when It was routine, however, for the youngan armed robber took a few thousand est Casagrande daughter to get a nightdollars in cash, tied him up and locked time hug from her father, and she was still him in the safe. Robbery sounded plauawake around midnight, waiting for him. sible, but it occurred to Warrick that She climbed the stairs to his bedroom and Spillman was discovered the morning saw light filtering under his door. The little Top: Carlos Giardi shows after a crew of workmen arrived in the girl opened the door and saw her father lyinvestigator Jack Gilmore his area; they would certainly have heard ing fully clothed on his bed. Although he secret gold processing mill the treasurer kicking the vault door or was slumped to one side, she thought he was underneath the Roma Bar. Bottom: Everett Shearin (left) making noise. The sheriff also found a asleep and tried to wake him. Casagrande’s unwittingly tipped off Sheriff screwdriver inside the vault that Spilllimp body rolled over to expose the stillWarrick (right) about the man could have used to cinch the wire bleeding gash at the back of his head. Horhigh-grading scheme. himself. His suspicions were confirmed rified, she screamed for help. when the treasurer, aware that an auA hotel guest called Telluride’s doctor/ ditor and a special agent were examining county records for coroner, J.J. Parker, who in turn summoned Sheriff Warrick. suspected irregularities, confessed to Sheriff Warrick that the The two men started forming theories about the murder, and robbery was a hoax and that he had been stealing small sums their first hunch was that a stranger drugged and murdered of county money for four years. Spillman was sentenced to five Casagrande. But after lab reports showed that no drug was into eight years of hard labor in the state penitentiary. volved, their second guess was that the hotel owner let someAs law abiding as Sheriff Warrick was, he must have had one he knew come into his bedroom, unaware of the danger. mixed feelings about his role in convicting a poacher named Then the murder weapon was discovered: a homemade tire Irvin Wolfe. Anna Flora, a rancher, reported to Warrick that iron. Sheriff Warrick thought someone in Telluride would one of her veal calves had been stolen and slaughtered. While surely identify the owner of this unique tool, but no one did, so investigating the crime scene, Sheriff Warrick found a 303 it seemed unlikely that the murderer was a local. ▶▶