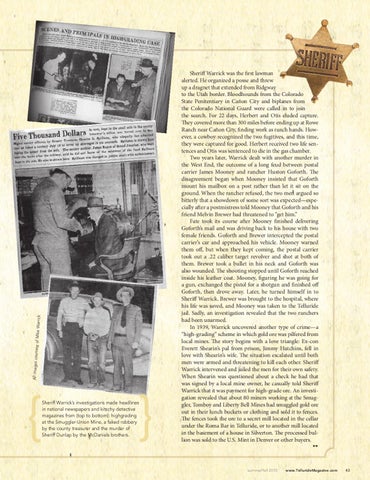 Sheriff Warrick’s investigations made headlines in national newspapers and kitschy detective magazines from (top to bottom): highgrading at the Smuggler-Union Mine, a faked robbery by the county treasurer and the murder of Sheriff Dunlap by the McDaniels brothers.

Sheriff Warrick was the first lawman alerted. He organized a posse and threw up a dragnet that extended from Ridgway to the Utah border. Bloodhounds from the Colorado State Penitentiary in Cañon City and biplanes from the Colorado National Guard were called in to join the search. For 22 days, Herbert and Otis eluded capture. They covered more than 300 miles before ending up at Rowe Ranch near Cañon City, finding work as ranch hands. However, a cowboy recognized the two fugitives, and this time, they were captured for good. Herbert received two life sentences and Otis was sentenced to die in the gas chamber. Two years later, Warrick dealt with another murder in the West End, the outcome of a long feud between postal carrier James Mooney and rancher Huston Goforth. The disagreement began when Mooney insisted that Goforth mount his mailbox on a post rather than let it sit on the ground. When the rancher refused, the two men argued so bitterly that a showdown of some sort was expected—especially after a postmistress told Mooney that Goforth and his friend Melvin Brewer had threatened to “get him.” Fate took its course after Mooney finished delivering Goforth’s mail and was driving back to his house with two female friends. Goforth and Brewer intercepted the postal carrier’s car and approached his vehicle. Mooney warned them off, but when they kept coming, the postal carrier took out a .22 caliber target revolver and shot at both of them. Brewer took a bullet in his neck and Goforth was also wounded. The shooting stopped until Goforth reached inside his leather coat. Mooney, figuring he was going for a gun, exchanged the pistol for a shotgun and finished off Goforth, then drove away. Later, he turned himself in to Sheriff Warrick. Brewer was brought to the hospital, where his life was saved, and Mooney was taken to the Telluride jail. Sadly, an investigation revealed that the two ranchers had been unarmed. In 1939, Warrick uncovered another type of crime—a “high-grading” scheme in which gold ore was pilfered from local mines. The story begins with a love triangle: Ex-con Everett Shearin’s pal from prison, Jimmy Hutchins, fell in love with Shearin’s wife. The situation escalated until both men were armed and threatening to kill each other. Sheriff Warrick intervened and jailed the men for their own safety. When Shearin was questioned about a check he had that was signed by a local mine owner, he casually told Sheriff Warrick that it was payment for high-grade ore. An investigation revealed that about 80 miners working at the Smuggler, Tomboy and Liberty Bell Mines had smuggled gold ore out in their lunch buckets or clothing and sold it to fences. The fences took the ore to a secret mill located in the cellar under the Roma Bar in Telluride, or to another mill located in the basement of a house in Silverton. The processed bullion was sold to the U.S. Mint in Denver or other buyers.