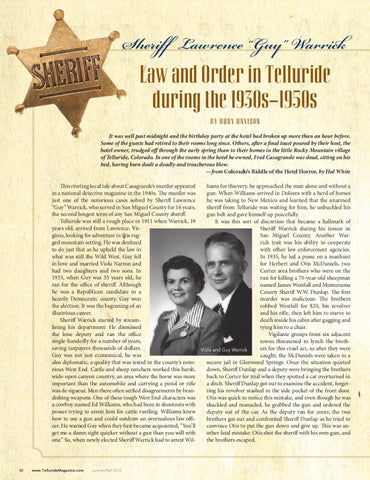 Sheriff Lawrence “Guy” Warrick Law and Order in Telluride during the 1930s-1950s By Rudy Davison It was well past midnight and the birthday party at the hotel had broken up more than an hour before. Some of the guests had retired to their rooms long since. Others, after a final toast poured by their host, the hotel owner, trudged off through the early spring thaw to their homes in the little Rocky Mountain village of Telluride, Colorado. In one of the rooms in the hotel he owned, Fred Casagrande was dead, sitting on his bed, having been dealt a deadly and treacherous blow. —from Colorado’s Riddle of the Hotel Horror, by Hal White This riveting local tale about Casagrande’s murder appeared liams for thievery, he approached the man alone and without a in a national detective magazine in the 1940s. The murder was gun. When Williams arrived in Dolores with a herd of horses just one of the notorious cases solved by Sheriff Lawrence he was taking to New Mexico and learned that the unarmed “Guy” Warrick, who served in San Miguel County for 16 years, sheriff from Telluride was waiting for him, he unbuckled his the second longest term of any San Miguel County sheriff. gun belt and gave himself up peacefully. Telluride was still a rough place in 1911 when Warrick, 19 It was this sort of discretion that became a hallmark of years old, arrived from Lawrence, VirSheriff Warrick during his tenure in ginia, looking for adventure in this rugSan Miguel County. Another Warged mountain setting. He was destined rick trait was his ability to cooperate to do just that as he upheld the law in with other law enforcement agencies. what was still the Wild West. Guy fell In 1935, he led a posse on a manhunt in love and married Viola Narron and for Herbert and Otis McDaniels, two had two daughters and two sons. In Cortez area brothers who were on the 1933, when Guy was 35 years old, he run for killing a 70-year-old sheepman ran for the office of sheriff. Although named James Westfall and Montezuma he was a Republican candidate in a County Sheriff W.W. Dunlap. The first heavily Democratic county, Guy won murder was malicious: The brothers the election. It was the beginning of an robbed Westfall for $20, his revolver illustrious career. and his rifle, then left him to starve to Sheriff Warrick started by streamdeath inside his cabin after gagging and lining his department: He dismissed tying him to a chair. the lone deputy and ran the office Vigilante groups from six adjacent single-handedly for a number of years, towns threatened to lynch the brothsaving taxpayers thousands of dollars. ers for this cruel act, so after they were Viola and Guy Warrick Guy was not just economical, he was caught, the McDaniels were taken to a also diplomatic, a quality that was tested in the county’s notosecure jail in Glenwood Springs. Once the situation quieted rious West End. Cattle and sheep ranchers worked this harsh, down, Sheriff Dunlap and a deputy were bringing the brothers wide-open canyon country, an area where the horse was more back to Cortez for trial when they spotted a car overturned in important than the automobile and carrying a pistol or rifle a ditch. Sheriff Dunlap got out to examine the accident, forgetwas de rigueur. Men there often settled disagreements by branting his revolver stashed in the side pocket of the front door. dishing weapons. One of these tough West End characters was Otis was quick to notice this mistake, and even though he was a cowboy named Ed Williams, who had been in shootouts with shackled and manacled, he grabbed the gun and ordered the posses trying to arrest him for cattle rustling. Williams knew deputy out of the car. As the deputy ran for cover, the two how to use a gun and could outdraw an overzealous law offibrothers got out and confronted Sheriff Dunlap as he tried to cer. He warned Guy when they first became acquainted, “You’ll convince Otis to put the gun down and give up. This was anget me a damn sight quicker without a gun than you will with other fatal mistake: Otis shot the sheriff with his own gun, and one.” So, when newly elected Sheriff Warrick had to arrest Wilthe brothers escaped.