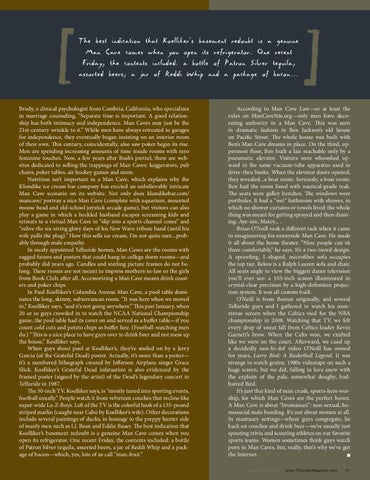 The best indication that Koelliker’s basement redoubt is a genuine Man Cave comes when you open its refrigerator. One recent Friday, the contents included: a bottle of Patron Silver tequila, assorted beers, a jar of Reddi Whip and a package of bacon...

Brody, a clinical psychologist from Cambria, California, who specializes in marriage counseling, “Separate time is important. A good relationship has both intimacy and independence. Man Caves may just be the 21st-century wrinkle to it.” While men have always retreated to garages for independence, they eventually began insisting on an interior room of their own. This century, coincidentally, also saw poker begin its rise. Men are spending increasing amounts of time inside rooms with zero feminine touches. Now, a few years after Bush’s pretzel, there are websites dedicated to selling the trappings of Man Caves: keggerators, pub chairs, poker tables, air hockey games and more. Nutrition isn’t important in a Man Cave, which explains why the Klondike ice cream bar company has erected an unbelievably intricate Man Cave scenario on its website. Not only does klondikebar.com/ mancave/ portray a nice Man Cave (complete with aquarium, mounted moose head and old-school joystick arcade game), but visitors can also play a game in which a heckled husband escapes screaming kids and retreats to a virtual Man Cave to “slip into a sports channel coma” and “relive the six-string glory days of his New Wave tribute band (until his wife pulls the plug).” How this sells ice cream, I’m not quite sure...probably through male empathy. In nicely appointed Telluride homes, Man Caves are the rooms with ragged futons and posters that could hang in college dorm rooms—and probably did years ago. Candles and sterling picture frames do not belong. These rooms are not meant to impress mothers-in-law or the girls from Book Club, after all. Accessorizing a Man Cave means drink coasters and poker chips. In Paul Koelliker’s Columbia Avenue Man Cave, a pool table dominates the long, skinny, subterranean room. “It was here when we moved in,” Koelliker says, “and it’s not going anywhere.” This past January, when 20 or so guys crowded in to watch the NCAA National Championship game, the pool table had its cover on and served as a buffet table—if you count cold cuts and potato chips as buffet fare. (Football-watching men do.) “This is a nice place to have guys over to drink beer and not mess up the house,” Koelliker says. When guys shoot pool at Koelliker’s, they’re smiled on by a Jerry Garcia (of the Grateful Dead) poster. Actually, it’s more than a poster— it’s a numbered lithograph created by Jefferson Airplane singer Grace Slick. Koelliker’s Grateful Dead infatuation is also evidenced by the framed poster (signed by the artist) of the Dead’s legendary concert in Telluride in 1987. The 50-inch TV, Koelliker says, is “mostly tuned into sporting events, football usually.” People watch it from velveteen couches that recline like super-wide La-Z-Boys. Left of the TV is the colorful husk of a 135-pound striped marlin (caught near Cabo by Koelliker’s wife). Other decorations include several paintings of ducks, in homage to the preppy hunter side of manly men such as LL Bean and Eddie Bauer. The best indication that Koelliker’s basement redoubt is a genuine Man Cave comes when you open its refrigerator. One recent Friday, the contents included: a bottle of Patron Silver tequila, assorted beers, a jar of Reddi Whip and a package of bacon—which, yes, lots of us call “man-fruit.”

According to Man Cave Law—or at least the rules on ManCaveSite.org—only men have decorating authority in a Man Cave. This was seen in dramatic fashion in Ben Jackson’s old house on Pacific Street. The whole house was built with Ben’s Man Cave dreams in place. On the third, uppermost floor, Ben built a lair reachable only by a pneumatic elevator. Visitors were whooshed upward in the same vacuum-tube apparatus used in drive-thru banks. When the elevator doors opened, they revealed...a boat room. Seriously, a boat room: Ben had the room lined with nautical-grade teak. The seats were galley benches. The windows were portholes. It had a “wet” bathroom with shower, in which no shower curtains or towels lived: the whole thing was meant for getting sprayed and then draining. Aye-aye, Matey... . Brian O’Neill took a different tack when it came to imagineering his sunnyside Man Cave. He made it all about the home theater. “Nine people can sit there comfortably,” he says. It’s a two-tiered design. A sprawling, L-shaped, microfiber sofa occupies the top tier. Below is a Ralph Lauren sofa and chair. All seats angle to view the biggest damn television you’ll ever see: a 103-inch screen illuminated in crystal-clear precision by a high-definition projection system. It was all custom built. O’Neill is from Boston originally, and several Telluride guys and I gathered to watch his monstrous screen when the Celtics vied for the NBA championship in 2008. Watching that TV, we felt every drop of sweat fall from Celtics leader Kevin Garnett’s brow. When the Celts won, we exulted like we were on the court. Afterward, we cued up a decidedly non-hi-def video O’Neill has owned for years, Larry Bird: A Basketball Legend. It was strange to watch grainy, 1980s videotape on such a huge screen, but we did, falling in love anew with the exploits of the pale, somewhat doughy, badhaired Bird. It’s just that kind of man crush, sports-hero worship, for which Man Caves are the perfect haven. A Man Cave is about “bromances”: non-sexual, homosocial male bonding. It’s not about women at all. In mantuary settings—where guys congregate, lie back on couches and drink beer—we’re usually just spouting trivia and scouting athletes on our favorite sports teams. Women sometimes think guys watch porn in Man Caves, but, really, that’s why we’ve got g the Internet. summer/fall 2010