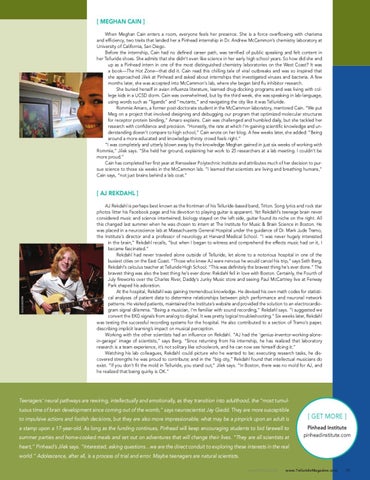 [ Meghan Cain ] When Meghan Cain enters a room, everyone feels her presence. She is a force overflowing with charisma and efficiency, two traits that landed her a Pinhead internship in Dr. Andrew McCammon’s chemistry laboratory at University of California, San Diego. Before the internship, Cain had no defined career path, was terrified of public speaking and felt content in her Telluride shoes. She admits that she didn’t even like science in her early high school years. So how did she end up as a Pinhead intern in one of the most distinguished chemistry laboratories on the West Coast? It was a book—The Hot Zone—that did it. Cain read this chilling tale of viral outbreaks and was so inspired that she approached Jilek at Pinhead and asked about internships that investigated viruses and bacteria. A few months later, she was accepted into McCammon’s lab, where she began bird flu inhibitor research. She buried herself in avian influenza literature, learned drug-docking programs and was living with college kids in a UCSD dorm. Cain was overwhelmed, but by the third week, she was speaking in lab-language, using words such as “ligands” and “mutants,” and navigating the city like it was Telluride. Rommie Amaro, a former post-doctorate student in the McCammon laboratory, mentored Cain. “We put Meg on a project that involved designing and debugging our program that optimized molecular structures for receptor protein binding,” Amaro explains. Cain was challenged and humbled daily, but she tackled her research with confidence and precision. “Honestly, the rate at which I’m gaining scientific knowledge and understanding doesn’t compare to high school,” Cain wrote on her blog. A few weeks later, she added: “Being around a more-educated and knowledge-thirsty crowd feels right.” “I was completely and utterly blown away by the knowledge Meghan gained in just six weeks of working with Rommie,” Jilek says. “She held her ground, explaining her work to 25 researchers at a lab meeting. I couldn’t be more proud.” Cain has completed her first year at Rensselaer Polytechnic Institute and attributes much of her decision to pursue science to those six weeks in the McCammon lab. “I learned that scientists are living and breathing humans,” Cain says, “not just brains behind a lab coat.”

[ aj rekdahl ] AJ Rekdahl is perhaps best known as the frontman of his Telluride-based band, Triton. Song lyrics and rock star photos litter his Facebook page and his devotion to playing guitar is apparent. Yet Rekdahl’s teenage brain never considered music and science intertwined; biology stayed on the left side, guitar found its niche on the right. All this changed last summer when he was chosen to intern at The Institute for Music & Brain Science in Boston. He was placed in a neuroscience lab at Massachusetts General Hospital under the guidance of Dr. Mark Jude Tramo, the Institute’s director and a professor of neurology at Harvard Medical School. “I was never hugely interested in the brain,” Rekdahl recalls, “but when I began to witness and comprehend the effects music had on it, I became fascinated.” Rekdahl had never traveled alone outside of Telluride, let alone to a notorious hospital in one of the busiest cities on the East Coast. “Those who knew AJ were nervous he would cancel his trip,” says Seth Berg, Rekdahl’s calculus teacher at Telluride High School. “This was definitely the bravest thing he’s ever done.” The bravest thing was also the best thing he’s ever done: Rekdahl fell in love with Boston. Certainly, the Fourth of July fireworks over the Charles River, Daddy’s Junky Music store and seeing Paul McCartney live at Fenway Park shaped his adoration. At the hospital, Rekdahl was gaining tremendous knowledge. He devised his own math codes for statistical analyses of patient data to determine relationships between pitch performance and neuronal network patterns. He visited patients, maintained the Institute’s website and provided the solution to an electrocardiogram signal dilemma. “Being a musician, I’m familiar with sound recording,” Rekdahl says. “I suggested we convert the EKG signals from analog to digital. It was pretty logical troubleshooting.” Six weeks later, Rekdahl was testing the successful recording systems for the hospital. He also contributed to a section of Tramo’s paper, describing implicit learning’s impact on musical perception. Working with the other scientists had an influence on Rekdahl. “AJ had the ‘genius-inventor-working-alonein-garage’ image of scientists,” says Berg. “Since returning from his internship, he has realized that laboratory research is a team experience, it’s not solitary like schoolwork, and he can now see himself doing it.” Watching his lab colleagues, Rekdahl could picture who he wanted to be; executing research tasks, he discovered strengths he was proud to contribute; and in the “big city,” Rekdahl found that intellectual musicians do exist. “If you don’t fit the mold in Telluride, you stand out,” Jilek says. “In Boston, there was no mold for AJ, and he realized that being quirky is OK.”

Teenagers’ neural pathways are rewiring, intellectually and emotionally, as they transition into adulthood, the “most tumultuous time of brain development since coming out of the womb,” says neuroscientist Jay Giedd. They are more susceptible to impulsive actions and foolish decisions, but they are also more impressionable; what may be a pinprick upon an adult is a stamp upon a 17-year-old. As long as the funding continues, Pinhead will keep encouraging students to bid farewell to summer parties and home-cooked meals and set out on adventures that will change their lives. “They are all scientists at

heart,” Pinhead’s Jilek says. “Interested, asking questions…we are the direct conduit to exploring these interests in the real world.” Adolescence, after all, is a process of trial and error. Maybe teenagers are natural scientists. summer/fall 2010