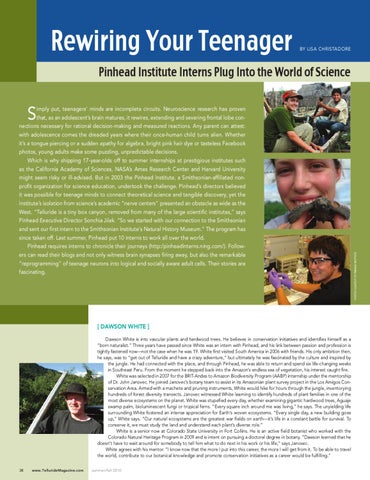 Pinhead Institute Interns Plug Into the World of Science imply put, teenagers’ minds are incomplete circuits. Neuroscience research has proven that, as an adolescent’s brain matures, it rewires, extending and severing frontal lobe connections necessary for rational decision-making and measured reactions. Any parent can attest: with adolescence comes the dreaded years where their once-human child turns alien. Whether it’s a tongue piercing or a sudden apathy for algebra, bright pink hair dye or tasteless Facebook photos, young adults make some puzzling, unpredictable decisions. Which is why shipping 17-year-olds off to summer internships at prestigious institutes such as the California Academy of Sciences, NASA’s Ames Research Center and Harvard University might seem risky or ill-advised. But in 2003 the Pinhead Institute, a Smithsonian-affiliated nonprofit organization for science education, undertook the challenge. Pinhead’s directors believed it was possible for teenage minds to connect theoretical science and tangible discovery, yet the Institute’s isolation from science’s academic “nerve centers” presented an obstacle as wide as the West. “Telluride is a tiny box canyon, removed from many of the large scientific institutes,” says Pinhead Executive Director Sonchia Jilek. “So we started with our connection to the Smithsonian and sent our first intern to the Smithsonian Institute’s Natural History Museum.” The program has since taken off. Last summer, Pinhead put 10 interns to work all over the world. Pinhead requires interns to chronicle their journeys (http:/pinheadinterns.ning.com/). Followers can read their blogs and not only witness brain synapses firing away, but also the remarkable “reprogramming” of teenage neurons into logical and socially aware adult cells. Their stories are fascinating.

[ dawson white ] Dawson White is into vascular plants and hardwood trees. He believes in conservation initiatives and identifies himself as a “born naturalist.” Three years have passed since White was an intern with Pinhead, and his link between passion and profession is tightly fastened now—not the case when he was 19. White first visited South America in 2006 with friends. His only ambition then, he says, was to “get out of Telluride and have a crazy adventure,” but ultimately he was fascinated by the culture and inspired by the jungle. He had connected with the place, and through Pinhead, he was able to return and spend six life-changing weeks in Southeast Peru. From the moment he stepped back into the Amazon’s endless sea of vegetation, his interest caught fire. White was selected in 2007 for the BRIT-Andes to Amazon Biodiversity Program (AABP) internship under the mentorship of Dr. John Janovec. He joined Janovec’s botany team to assist in its Amazonian plant survey project in the Los Amigos Conservation Area. Armed with a machete and pruning instruments, White would hike for hours through the jungle, inventorying hundreds of forest diversity transects. Janovec witnessed White learning to identify hundreds of plant families in one of the most diverse ecosystems on the planet. White was stupefied every day, whether examining gigantic hardwood trees, Aguaje swamp palm, bioluminescent fungi or tropical ferns. “Every square inch around me was living,” he says. The unyielding life surrounding White fostered an intense appreciation for Earth’s woven ecosystems. “Every single day, a new building goes up,” White says. “Our natural ecosystems are the greatest war fields on earth—it’s life in a constant battle for survival. To conserve it, we must study the land and understand each plant’s diverse role.” White is a senior now at Colorado State University in Fort Collins. He is an active field botanist who worked with the Colorado Natural Heritage Program in 2009 and is intent on pursuing a doctoral degree in botany. “Dawson learned that he doesn’t have to wait around for somebody to tell him what to do next in his work or his life,” says Janovec. White agrees with his mentor. “I know now that the more I put into this career, the more I will get from it. To be able to travel the world, contribute to our botanical knowledge and promote conservation initiatives as a career would be fulfilling.” 38