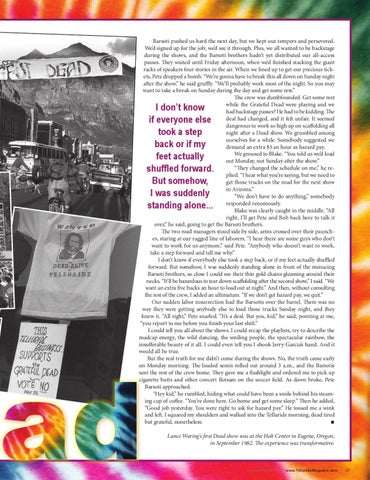 Barsoti pushed us hard the next day, but we kept our tempers and persevered. We’d signed up for the job; we’d see it through. Plus, we all wanted to be backstage during the shows, and the Barsoti brothers hadn’t yet distributed our all-access passes. They waited until Friday afternoon, when we’d finished stacking the giant racks of speakers four stories in the air. When we lined up to get our precious tickets, Pete dropped a bomb. “We’re gonna have to break this all down on Sunday night after the show,” he said gruffly. “We’ll probably work most of the night. So you may want to take a break on Sunday during the day and get some rest.” The crew was dumbfounded. Get some rest while the Grateful Dead were playing and we had backstage passes? He had to be kidding. The deal had changed, and it felt unfair. It seemed dangerous to work so high up on scaffolding all night after a Dead show. We grumbled among ourselves for a while. Somebody suggested we demand an extra $5 an hour as hazard pay. We groused to Blake. “You told us we’d load out Monday, not Sunday after the show.” “They changed the schedule on me,” he replied. “I hear what you’re saying, but we need to get those trucks on the road for the next show in Arizona.” “We don’t have to do anything,” somebody responded venomously. Blake was clearly caught in the middle. “All right, I’ll get Pete and Bob back here to talk it over,” he said, going to get the Barsoti brothers. The two road managers stood side by side, arms crossed over their paunches, staring at our ragged line of laborers. “I hear there are some guys who don’t want to work for us anymore,” said Pete. “Anybody who doesn’t want to work, take a step forward and tell me why.” I don’t know if everybody else took a step back, or if my feet actually shuffled forward. But somehow, I was suddenly standing alone in front of the menacing Barsoti brothers, so close I could see their thin gold chains gleaming around their necks. “It’ll be hazardous to tear down scaffolding after the second show,” I said. “We want an extra five bucks an hour to load out at night.” And then, without consulting the rest of the crew, I added an ultimatum. “If we don’t get hazard pay, we quit.” Our sudden labor insurrection had the Barsotis over the barrel. There was no way they were getting anybody else to load those trucks Sunday night, and they knew it. “All right,” Pete snarled. “It’s a deal. But you, kid,” he said, pointing at me, “you report to me before you finish your last shift.” I could tell you all about the shows. I could recap the playlists, try to describe the madcap energy, the wild dancing, the smiling people, the spectacular rainbow, the insufferable beauty of it all. I could even tell you I shook Jerry Garcia’s hand. And it would all be true. But the real truth for me didn’t come during the shows. No, the truth came early on Monday morning. The loaded semis rolled out around 3 a.m., and the Barsotis sent the rest of the crew home. They gave me a flashlight and ordered me to pick up cigarette butts and other concert flotsam on the soccer field. As dawn broke, Pete Barsoti approached. “Hey kid,” he rumbled, hiding what could have been a smile behind his steaming cup of coffee. “You’re done here. Go home and get some sleep.” Then he added, “Good job yesterday. You were right to ask for hazard pay.” He tossed me a wink and left. I squared my shoulders and walked into the Telluride morning, dead tired g but grateful, nonetheless.

I don’t know if everyone else took a step back or if my feet actually shuffled forward. But somehow, I was suddenly standing alone...

Lance Waring’s first Dead show was at the Holt Center in Eugene, Oregon, in September 1982. The experience was transformative.