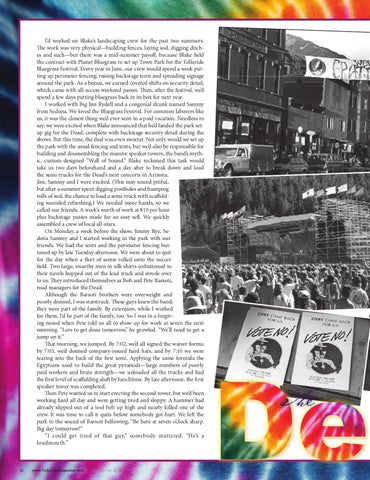 I’d worked on Blake’s landscaping crew for the past two summers. The work was very physical—building fences, laying sod, digging ditches and such—but there was a mid-summer payoff, because Blake held the contract with Planet Bluegrass to set up Town Park for the Telluride Bluegrass Festival. Every year in June, our crew would spend a week putting up perimeter fencing, raising backstage tents and spreading signage around the park. As a bonus, we earned coveted shifts on security detail, which came with all-access weekend passes. Then, after the festival, we’d spend a few days putting bluegrass back in its box for next year. I worked with Big Jim Rydell and a congenial drunk named Sammy from Sedona. We loved the Bluegrass Festival. For common laborers like us, it was the closest thing we’d ever seen to a paid vacation. Needless to say, we were excited when Blake announced that he’d landed the park setup gig for the Dead, complete with backstage security detail during the shows. But this time, the deal was even sweeter. Not only would we set up the park with the usual fencing and tents, but we’d also be responsible for building and disassembling the massive speaker towers, the band’s mythic, custom-designed “Wall of Sound.” Blake reckoned this task would take us two days beforehand and a day after to break down and load the semi-trucks for the Dead’s next concerts in Arizona. Jim, Sammy and I were excited. (This may sound pitiful, but after a summer spent digging postholes and humping rolls of sod, the chance to load a semi-truck with scaffolding sounded refreshing.) We needed more hands, so we called our friends. A week’s worth of work at $10 per hour plus backstage passes made for an easy sell. We quickly assembled a crew of local all-stars. On Monday, a week before the show, Jimmy Rye, Sedona Sammy and I started working in the park with our friends. We had the tents and the perimeter fencing buttoned up by late Tuesday afternoon. We were about to quit for the day when a fleet of semis rolled onto the soccer field. Two large, swarthy men in silk shirts unbuttoned to their navels hopped out of the lead truck and strode over to us. They introduced themselves as Bob and Pete Barsoti, road managers for the Dead. Although the Barsoti brothers were overweight and poorly dressed, I was starstruck. These guys knew the band; they were part of the family. By extension, while I worked for them, I’d be part of the family, too. So I was in a forgiving mood when Pete told us all to show up for work at seven the next morning. “Lots to get done tomorrow,” he growled. “We’ll need to get a jump on it.” That morning, we jumped. By 7:02, we’d all signed the waiver forms; by 7:05, we’d donned company-issued hard hats, and by 7:10 we were tearing into the back of the first semi. Applying the same formula the Egyptians used to build the great pyramids—large numbers of poorly paid workers and brute strength—we unloaded all the trucks and had the first level of scaffolding aloft by lunchtime. By late afternoon, the first speaker tower was completed. Then Pete wanted us to start erecting the second tower, but we’d been working hard all day and were getting tired and sloppy. A hammer had already slipped out of a tool belt up high and nearly killed one of the crew. It was time to call it quits before somebody got hurt. We left the park to the sound of Barsoti bellowing, “Be here at seven o’clock sharp. Big day tomorrow!” “I could get tired of that guy,” somebody muttered. “He’s a loudmouth.”