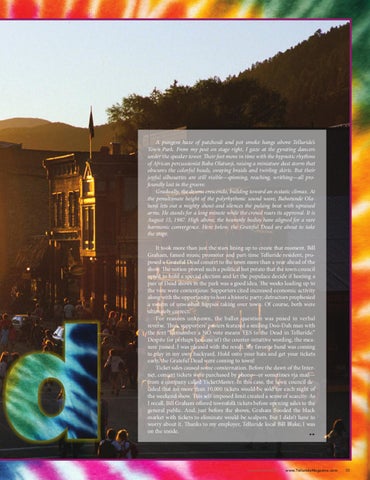 A pungent haze of patchouli and pot smoke hangs above Telluride’s Town Park. From my post on stage right, I gaze at the gyrating dancers under the speaker tower. Their feet move in time with the hypnotic rhythms of African percussionist Baba Olatunji, raising a miniature dust storm that obscures the colorful beads, swaying braids and twirling skirts. But their joyful silhouettes are still visible—spinning, reaching, writhing—all profoundly lost in the groove. Gradually, the drums crescendo, building toward an ecstatic climax. At the penultimate height of the polyrhythmic sound wave, Babatunde Olatunji lets out a mighty shout and silences the pulsing beat with upraised arms. He stands for a long minute while the crowd roars its approval. It is August 15, 1987. High above, the heavenly bodies have aligned for a rare harmonic convergence. Here below, the Grateful Dead are about to take the stage. It took more than just the stars lining up to create that moment. Bill Graham, famed music promoter and part-time Telluride resident, proposed a Grateful Dead concert to the town more than a year ahead of the show. The notion proved such a political hot potato that the town council opted to hold a special election and let the populace decide if hosting a pair of Dead shows in the park was a good idea. The weeks leading up to the vote were contentious: Supporters cited increased economic activity along with the opportunity to host a historic party; detractors prophesied a swarm of unwashed hippies taking over town. Of course, both were ultimately correct. For reasons unknown, the ballot question was posed in verbal reverse. Thus, supporters’ posters featured a smiling Doo-Dah man with the text “Remember a NO vote means YES to the Dead in Telluride.” Despite (or perhaps because of) the counter-intuitive wording, the measure passed. I was pleased with the result. My favorite band was coming to play in my own backyard. Hold onto your hats and get your tickets early, the Grateful Dead were coming to town! Ticket sales caused some consternation. Before the dawn of the Internet, concert tickets were purchased by phone—or sometimes via mail— from a company called TicketMaster. In this case, the town council decided that no more than 10,000 tickets would be sold for each night of the weekend show. This self-imposed limit created a sense of scarcity. As I recall, Bill Graham offered townsfolk tickets before opening sales to the general public. And, just before the shows, Graham flooded the black market with tickets to eliminate would-be scalpers. But I didn’t have to worry about it. Thanks to my employer, Telluride local Bill Blake, I was on the inside. ▶▶