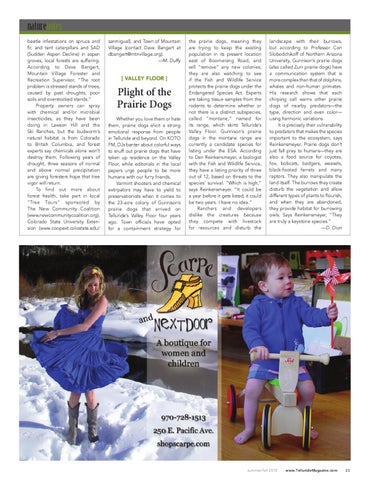 naturenotes beetle infestations on spruce and fir, and tent caterpillars and SAD (Sudden Aspen Decline) in aspen groves, local forests are suffering. According to Dave Bangert, Mountain Village Forester and Recreation Supervisor, “The root problem is stressed stands of trees, caused by past droughts, poor soils and overstocked stands.” Property owners can spray with chemical and/or microbial insecticides, as they have been doing in Lawson Hill and the Ski Ranches, but the budworm’s natural habitat is from Colorado to British Columbia, and forest experts say chemicals alone won’t destroy them. Following years of drought, three seasons of normal and above normal precipitation are giving foresters hope that tree vigor will return. To find out more about forest health, take part in local “Tree Tours” sponsored by The New Community Coalition (www.newcommunitycoalition.org), Colorado State University Extension (www.coopext.colostate.edu/

Plight of the Prairie Dogs Whether you love them or hate them, prairie dogs elicit a strong emotional response from people in Telluride and beyond. On KOTO FM, DJs banter about colorful ways to snuff out prairie dogs that have taken up residence on the Valley Floor, while editorials in the local papers urge people to be more humane with our furry friends. Varmint shooters and chemical extirpators may have to yield to preservationists when it comes to the 23-acre colony of Gunnison’s prairie dogs that arrived on Telluride’s Valley Floor four years ago. Town officials have opted for a containment strategy for

the prairie dogs, meaning they are trying to keep the existing population in its present location east of Boomerang Road, and will “remove” any new colonies; they are also watching to see if the Fish and Wildlife Service protects the prairie dogs under the Endangered Species Act. Experts are taking tissue samples from the rodents to determine whether or not there is a distinct subspecies, called “montane,” named for its range, which skirts Telluride’s Valley Floor. Gunnison’s prairie dogs in the montane range are currently a candidate species for listing under the ESA. According to Dan Reinkensmeyer, a biologist with the Fish and Wildlife Service, they have a listing priority of three out of 12, based on threats to the species’ survival. “Which is high,” says Reinkensmeyer. “It could be a year before it gets listed; it could be two years. I have no idea.” Ranchers and developers dislike the creatures because they compete with livestock for resources and disturb the

landscape with their burrows, but according to Professor Con Slobodchikoff of Northern Arizona University, Gunnison’s prairie dogs (also called Zuni prairie dogs) have a communication system that is more complex than that of dolphins, whales and non-human primates. His research shows that each chirping call warns other prairie dogs of nearby predators—the type, direction and even color— using harmonic variations. It is precisely their vulnerability to predators that makes the species important to the ecosystem, says Reinkensmeyer. Prairie dogs don’t just fall prey to humans—they are also a food source for coyotes, fox, bobcats, badgers, weasels, black-footed ferrets and many raptors. They also manipulate the land itself. The burrows they create disturb the vegetation and allow different types of plants to flourish, and when they are abandoned, they provide habitat for burrowing owls. Says Reinkensmeyer, “They are truly a keystone species.” —D. Dion