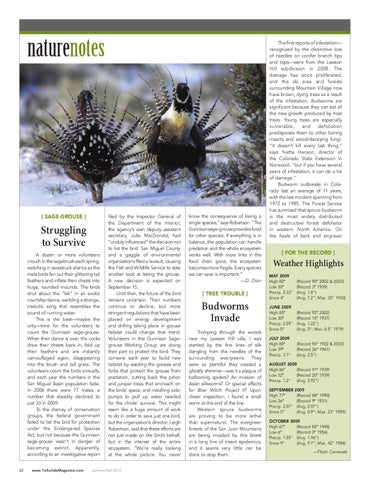 Struggling to Survive A dozen or more volunteers crouch in the sagebrush each spring, watching in awestruck silence as the male birds fan out their glittering tail feathers and inflate their chests into huge, rounded mounds. The birds strut about the “lek” in an exotic courtship dance, warbling a strange, melodic song that resembles the sound of running water. This is the best—maybe the only—time for the volunteers to count the Gunnison sage-grouse. When their dance is over, the cocks draw their chests back in, fold up their feathers and are instantly camouflaged again, disappearing into the brush and tall grass. The volunteers count the birds annually, and each year the numbers in the San Miguel Basin population fade. In 2006 there were 77 males, a number that steadily declined to just 33 in 2009. To the dismay of conservation groups, the federal government failed to list the bird for protection under the Endangered Species Act, but not because the Gunnison sage-grouse wasn’t in danger of becoming extinct. Apparently, according to an investigative report 22

filed by the Inspector General of the Department of the Interior, the agency’s own deputy assistant secretary, Julie MacDonald, had “unduly influenced” the decision not to list the bird. San Miguel County and a gaggle of environmental organizations filed a lawsuit, causing the Fish and Wildlife Service to take another look at listing the grouse. A new decision is expected on September 15. Until then, the future of the bird remains uncertain. Their numbers continue to decline, but more stringent regulations that have been placed on energy development and drilling taking place in grouse habitat could change that trend. Volunteers in the Gunnison Sagegrouse Working Group are doing their part to protect the bird. They convene each year to build new habitat by seeding the grasses and forbs that protect the grouse from predation, cutting back the piñon and juniper trees that encroach on the birds’ space, and installing solar pumps to pull up water needed for the chicks’ survival. This might seem like a huge amount of work to do in order to save just one bird, but the organization’s director, Leigh Robertson, said that these efforts are not just made on the bird’s behalf, but in the interest of the entire ecosystem. “We’re really looking at the whole picture. You never

know the consequence of losing a single species,” says Robertson. “The Gunnison sage-grouse provides food for other species: If everything is in balance, the population can handle predation and the whole ecosystem works well. With more links in the food chain gone, the ecosystem becomes more fragile. Every species we can save is important.” —D. Dion

Budworms Invade Tromping through the woods near my Lawson Hill villa, I was startled by the fine lines of silk dangling from the needles of the surrounding evergreens. They were so plentiful they created a ghostly shimmer—was it a plague of ballooning spiders? An invasion of Asian silkworms? Or special effects for Blair Witch Project II? Upon closer inspection, I found a small worm at the end of the line. Western spruce budworms are proving to be more lethal than supernatural. The evergreen forests of the San Juan Mountains are being invaded by this latest in a long line of insect epidemics, and it seems very little can be done to stop them.

The first reports of infestation— recognized by the distinctive loss of needles on conifer branch tips and tops—were from the Lawson Hill subdivision in 2008. The damage has since proliferated, and the ski area and forests surrounding Mountain Village now have brown, dying trees as a result of the infestation. Budworms are significant because they can eat all the new growth produced by host trees. Young trees are especially vulnerable, and defoliation predisposes them to other boring insects and wood-decaying fungi. “It doesn’t kill every last thing,” says Yvette Henson, director of the Colorado State Extension in Norwood, “but if you have several years of infestation, it can do a lot of damage.” Budworm outbreaks in Colorado last an average of 11 years, with the last incident spanning from 1972 to 1985. The Forest Service has surmised that spruce budworm is the most widely distributed and destructive forest defoliator in western North America. On the heels of bark and engraver