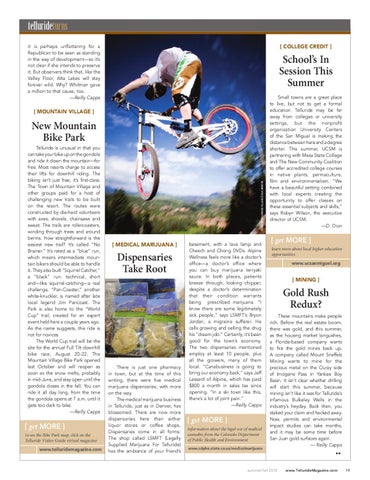 it is perhaps unflattering for a Republican to be seen as standing in the way of development—so it’s not clear if she intends to preserve it. But observers think that, like the Valley Floor, Alta Lakes will stay forever wild. Why? Whitman gave a million to that cause, too. —Reilly Capps

School’s In Session This Summer

[ get more ] to see the Bike Park map, click on the Telluride Visitor Guide virtual magazine

Telluride is unusual in that you can take your bike up on the gondola and ride it down the mountain—for free. Most resorts charge to access their lifts for downhill riding. The biking isn’t just free, it’s first-class: The Town of Mountain Village and other groups paid for a host of challenging new trails to be built on the resort. The routes were constructed by die-hard volunteers with axes, shovels, chainsaws and sweat. The trails are rollercoasters, winding through trees and around berms. How straightforward is the easiest new trail? It’s called “No Brainer.” It’s rated as a “blue” run, which means intermediate mountain bikers should be able to handle it. They also built “Squirrel Catcher,” a “black” run: technical, short and—like squirrel-catching—a real challenge. “Pan-Coaster,” another white-knuckler, is named after late local legend Jim Pancoast. The Park is also home to the “World Cup” trail, created for an expert event held here a couple years ago. As the name suggests, this ride is not for novices. The World Cup trail will be the site for the annual Full Tilt downhill bike race, August 20-22. The Mountain Village Bike Park opened last October and will reopen as soon as the snow melts, probably in mid-June, and stay open until the gondola closes in the fall. You can ride it all day long, from the time the gondola opens at 7 a.m. until it gets too dark to bike. —Reilly Capps

There is just one pharmacy in town, but at the time of this writing, there were five medical marijuana dispensaries, with more on the way. The medical marijuana business in Telluride, just as in Denver, has blossomed. There are now more dispensaries here than either liquor stores or coffee shops. Dispensaries come in all forms: The shop called LSMFT (Legally Supplied Marijuana For Telluride) has the ambiance of your friend’s

basement, with a lava lamp and Cheech and Chong DVDs. Alpine Wellness feels more like a doctor’s office—a doctor’s office where you can buy marijuana teriyaki sauce. In both places, patients breeze through, looking chipper, despite a doctor’s determination that their condition warrants being prescribed marijuana. “I know there are some legitimately sick people,” says LSMFT’s Bryon Jordan, a migraine sufferer. He calls growing and selling the drug his “dream job.” Certainly, it’s been good for the town’s economy. The two dispensaries mentioned employ at least 10 people, plus all the growers, many of them local. “Canabusiness is going to bring our economy back,” says Jeff Lessard of Alpine, which has paid $800 a month in sales tax since opening. “In a ski town like this, there’s a lot of joint pain.” —Reilly Capps

[ get more ] information about the legal use of medical cannabis from the Colorado Department of Public Health and Environment www.cdphe.state.co.us/medicalmarijuana

Small towns are a great place to live, but not to get a formal education. Telluride may be far away from colleges or university settings, but the nonprofit organization University Centers of the San Miguel is making the distance between here and a degree shorter. This summer, UCSM is partnering with Mesa State College and The New Community Coalition to offer accredited college courses in native plants, permaculture, film and environmentalism. “We have a beautiful setting combined with local experts creating the opportunity to offer classes on these essential subjects and skills,” says Robyn Wilson, the executive director of UCSM. —D. Dion

Gold Rush Redux? These mountains make people rich. Before the real estate boom, there was gold, and this summer, as the housing market languishes, a Florida-based company wants to fire the gold mines back up. A company called Mount Sneffels Mining wants to mine for the precious metal on the Ouray side of Imogene Pass in Yankee Boy Basin. It isn’t clear whether drilling will start this summer, because mining isn’t like it was for Telluride’s infamous Bulkeley Wells in the industry’s heyday. Back then, you staked your claim and hacked away. Now, permits and environmental impact studies can take months, and it may be some time before San Juan gold surfaces again. — Reilly Capps