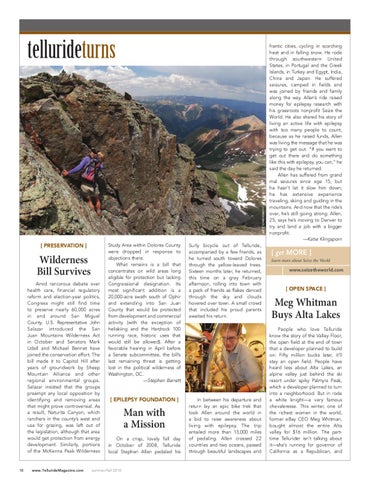 Wilderness Bill Survives Amid rancorous debate over health care, financial regulatory reform and election-year politics, Congress might still find time to preserve nearly 60,000 acres in and around San Miguel County. U.S. Representative John Salazar introduced the San Juan Mountains Wilderness Act in October and Senators Mark Udall and Michael Bennet have joined the conservation effort. The bill made it to Capitol Hill after years of groundwork by Sheep Mountain Alliance and other regional environmental groups. Salazar insisted that the groups preempt any local opposition by identifying and removing areas that might prove controversial. As a result, Naturita Canyon, which ranchers in the county’s west end use for grazing, was left out of the legislation, although that area would get protection from energy development. Similarly, portions of the McKenna Peak Wilderness

Study Area within Dolores County were dropped in response to objections there. What remains is a bill that concentrates on wild areas long eligible for protection but lacking Congressional designation. Its most significant addition is a 20,000-acre swath south of Ophir and extending into San Juan County that would be protected from development and commercial activity (with the exception of heliskiing and the Hardrock 100 running race, historic uses that would still be allowed). After a favorable hearing in April before a Senate subcommittee, the bill’s last remaining threat is getting lost in the political wilderness of Washington, DC. —Stephen Barrett

Surly bicycle out of Telluride, accompanied by a few friends, as he turned south toward Dolores through the yellow-leaved trees. Sixteen months later, he returned, this time on a gray February afternoon, rolling into town with a pack of friends as flakes danced through the sky and clouds hovered over town. A small crowd that included his proud parents awaited his return.

In between his departure and return lay an epic bike trek that took Allen around the world in a bid to raise awareness about living with epilepsy. The trip entailed more than 13,000 miles of pedaling. Allen crossed 22 countries and two oceans, passed through beautiful landscapes and

Man with a Mission On a crisp, lovely fall day in October of 2008, Telluride local Stephen Allen pedaled his

[ get more ] learn more about Seize the World

frantic cities, cycling in scorching heat and in falling snow. He rode through southwestern United States, in Portugal and the Greek Islands, in Turkey and Egypt, India, China and Japan. He suffered seizures, camped in fields and was joined by friends and family along the way. Allen’s ride raised money for epilepsy research with his grassroots nonprofit Seize the World. He also shared his story of living an active life with epilepsy with too many people to count, because as he raised funds, Allen was living the message that he was trying to get out. “If you want to get out there and do something like this with epilepsy, you can,” he said the day he returned. Allen has suffered from grand mal seizures since age 15, but he hasn’t let it slow him down; he has extensive experience traveling, skiing and guiding in the mountains. And now that the ride’s over, he’s still going strong: Allen, 25, says he’s moving to Denver to try and land a job with a bigger nonprofit. —Katie Klingsporn

People who love Telluride know the story of the Valley Floor, the open field at the end of town that a developer planned to build on: Fifty million bucks later, it’ll stay an open field. People have heard less about Alta Lakes, an alpine valley just behind the ski resort under spiky Palmyra Peak, which a developer planned to turn into a neighborhood. But in rode a white knight—a very famous chevaleresse. This winter, one of the richest women in the world, former eBay CEO Meg Whitman, bought almost the entire Alta valley for $16 million. The parttime Tellurider isn’t talking about it—she’s running for governor of California as a Republican, and